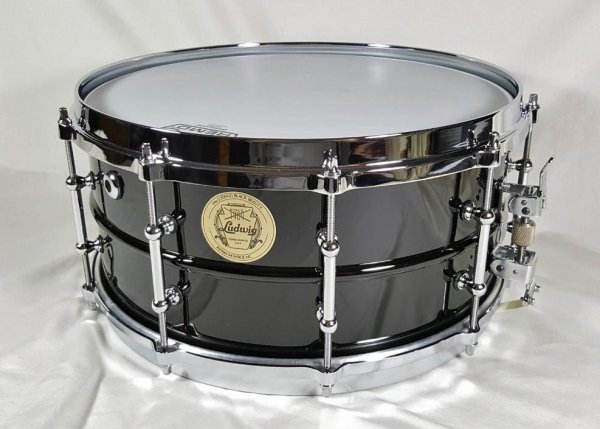 I purchased this drum new in 1988 from Atlanta Pro Percussion as "NOS" when I was there managing the custom department. It still had the receipt on the box where the store had purchased it in late 1986 (sorry, I looked but I no longer have the original store receipts). At the time, it was an original Monroe NC seamless brass shell Black Beauty and I played it for many years as my primary snare. But alas, at some point I turned to the dark side and removed the lacquer protecting the black nickel finish (I had some weird experimental finish idea that I never got around to trying) and that is where the problems really started. So after being drug around the world multiple times and always serving me with gusto and honor, I tossed it in a case and simply neglected it for the next 20 years of its life.

Here is what the shell looked like in the fall of 2016 when I decided to restore this 30+ year old work horse.... in retrospect, some would say ruin instead of restore. Everything went well until the guy I had spray a lacquer finish over the shell left it with several drips and runs. When he went to clean that coat off, he let the thinner and sander get on the badge and inside the shell resulting in considerable damage, so we were really at a whole new starting point. 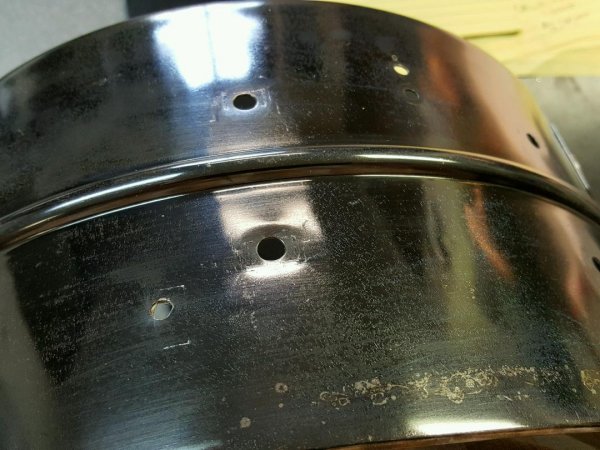 I removed the damaged badge, sanded the shell down and finished the interior, then applied the original key stone badge to the interior. Next, I reached out to Jerry Pelfrey at Punkinater Custom Drums and now Pelfrey Drum Works asking him to spray a nice black polyester automotive finish over the drum. And wow, did he nail it! To complete the project, I replaced EVERY SINGLE PART ON THE DRUM! Yep, not an original part left on the drum, not the original finish, the internal muffler is missing and it has a few small dings in the shell…Want to buy it? LOL!

But at the end of the day it sounds awesome, just like a Black Beauty should sound with die-cast hoops. In truth no, I don’t expect anyone to buy this drum, but you never know, if they do I know they will love it. If I were to keep it, it would not be the end of the world, but at the same time, it is simply NOT being played and that is a shame. If you want to give this monster a new lease on life, it’s yours for $350.00, delivered free in the lower US and I will include a UP Beato snare bag to protect it during the trip at no charge. I know, you can buy factory complete BB’s for this or another $100 or so, but it’s not going to be a brand new 33 years old drum that looks this cool! Be the only person in your respected circle of friends to have the most dis-respected Black Beauty in existence!

Let me know if you have any question or just want to make fun of me for creating this Frankenstein! It’s OK, I have it coming!
Thanks for the look,
Ward

Sorry for the extra post, I thought I had hit the photo maximum, but they are in the first thread.... now stop that laughing!!

I know someone may ask about trades so let me go ahead and say that I am not looking for trades at the moment, as I am raising dollars to buy a new 20 / 12 / 14 kit but your always welcome to send me your ideas, I do have a soft spot for Agop and Mehmet cymbals...
Last edited: Dec 4, 2019

What a cool drum!

I have you beat on the mother of all jacked up (bronze) BB's, though......it was neglected and looks like a beater, but the sound......GLWS.

LOL! Thanks guys, i feel bad about how I treated the drum, but I am actually happy with the end result. The only thing left to call this a BB is the shell and serial number... and that is pretty thin to some! I set the price based on the fact that I have $400.00 in the restoration. I got my original $600 investment back 20 fold over the years. I just have not played this drum in years... I will try to find some videos of it for fun.

OK, I DID find one on You Tube... this was from a live gospel show back in the mid 90's when this BB was still my main drum.... I have a ton of disc I played this on from the 90's as well, but it's more fun to see it in it's prime! The song starts around 2:10. The only think I had done to it at this point, was to de-spring the Imperial lugs with vinyl tubing and add the Ludwig marching die cast hoops to dry it out a but more and give it that cool 90's focused crack.

Hey gang, I just posted this on Wednesday so this was not to bump it back up and it was still on the top on the page. Just adjusting the price to a bit more realistic numbers.

A good friend who knows this drum and it's history laughed at me for 5 minuets when I told him I had it listed at $400. He convinced me I might have been a bit sentimental with my pricing! I pointed out that I still was including a new snare bag, paying the shipping and covering the pay pal fees... yet he did make convincing argument!

Price for my train wreck but real DNA BB snare is now $350.00 delivered with the case. Feel free to talk it over if you have other ideas...

I have done unspeakable things to drums. Someday I may even show them here. You’re good.
GLWS!

This should be one of those legendary drums that only pass back and forth in the the realm of DFO for the rest of time.

Geez, and I was having anxiety about whether to send a Noble and Cooley snare back to the factory for a "refresh."

That was a HUGE show. Holy crap. It looked like such comfortable stage set up too. I bet that was a blast.

Stretsch said:
This should be one of those legendary drums that only pass back and forth in the the realm of DFO for the rest of time.
Click to expand...

Well folks, you made my day! The most jacked up black beauty in history has a new home with a DFO member! It will ship Monday, but keep watching the "drums for sale" thread because it could be for sale again by Friday! I am thrilled that it will be going to a home where it gets played. I like the drum as it turned out, so I have never been upset at the results of the restoration, I have simply been ticked off at my self that I ever neglected it and let it get in that bad of a condition in the first place!

Thanks to everyone for your kind words and views.... you made selling it a whole lot more enjoyable! Were I not raising dollars for a new kit (dont know what yet, just the sizes) I would have held on to it, but it was still not getting played so this is a win win for everyone!

What a fantastic story and instrument!! Someone just got the deal of a lifetime for a black beauty.
You must log in or register to reply here.

A
Can you mount a tom off an Atlas Classic stand?

T
Do you really need a Supraphonic?
2 3