Of course it depends on the cymbal, but I’d suggest giving a 24” a try. I’ll admit, it can be a little big to fit into a setup. I’d say that is the only trouble with it. I have some 20s, 22s, and two 24s. All Zildjians. The K lights can be lovely in the 24 size. I’ve used the K light a number of times on gigs and I love the sound. But I’m funny, sometimes I just want a more direct and compact 20” over there.
A

Bri6366 said:
My 24" 2002 Ride is an absolute beast. I love all the sounds you can get out of it along with that lush, shimmering 2002 sound. It's just an amazing and dynamic cymbal. With that said, I don't have a 24" cymbal bag and I usually gigged on my 20" Paiste Dimensions Power Bell Ride (a beast in its own right) or my A. Zildijian 20" Ping Ride if the Dimensions was just too overpowering.

I had a 24” 2002 at one point, and I agree, great cymbal. I wish I still had it, but it came to a point where I decided to just stick with my Zildjians. Can’t own it all
P

Monday317 said:
I have a Bosporus Masters Series 24” ride that is the most complex, dusky, airy, brass plate I have ever heard. Out of my cold, dead, hands will I ever part with it.
Click to expand...

Won't part with mine either - blends with all my rides and has by far the lowest pitched wash. Probably nowhere as complex as yours, the wash is very even and can achieve the most vowel-like tah I've heard a cymbal do.
Last edited: Mar 27, 2021
B

AtlantaDrumGuy said:
I had a 24” 2002 at one point, and I agree, great cymbal. I wish I still had it, but it came to a point where I decided to just stick with my Zildjians. Can’t own it all
Click to expand...

Yeah a buddy of mine who owns multiple kits and sets of cymbals to go with every kit has decided to scale back his inventory, unload most of the 2002s and keep his Zildjians. There are some great Zildjians out there and he has a set of the redesigned A's on his old Imperialstars and K, K Custom Hybrids/ K Custom Sessions on his Birch Bubinga Starclassics. Personally I thought the 2002s went great with his Imperialstars, but he's just really taken a liking to the Zildjians.

I've had a Zildjian 24, a Giant Beat 24, and a couple of Sabian APX 24's. I'm a Zildjian guy, but I liked that one the least.
It was a big old heavy dog that you had to really whack to get anything out of.
The Giant Beat was my favorite. Nice sound and responsive at any volume.
The APX were really nice too. A good bargain, and a sound kind of in between a Giant Beat and a 2002.

I usually play an 18 or 20" bass drum sized kit though,
and those large cymbals seemed to kind of overpower the kits visually and sonically,
so those 24's are gone, and I tend to stick to rides 22" or smaller now - mostly 20's and 21's.
C

I've had a Reverand Al's Big Ride and it was too washy as a ride but as a crash was awesome. I currently own a 2002 ride and it is too heavy and I also own a 24 Medium A Zildjian from recent years and it doesn't seem to have any volume for the amount of wobble it has. I would love a 2002 in between the AVH and the regular ride.

I was kind of against it. 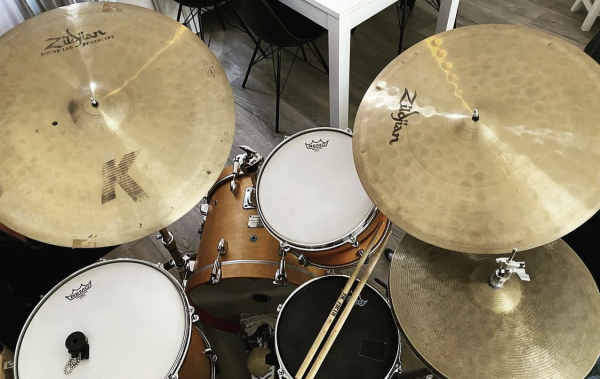 musiqman said:
I was kind of against it.

The only downside is you need a 24” bag or case.
Click to expand...

What are they prototypes of?

Phantomlimb777 said:
What are they prototypes of?
Click to expand...

these could be K light, Rennaissance, or another new line/artist request.

musiqman said:
these could be K light, Rennaissance, or another new line/artist request.

Maxwells has a 24” Turkish K out on Reverb that looks really nice.
T

I am in the market for a 24" ride. My cymbals now are a mix of Paiste 2002s and Giant Beats. I really like what I've heard of the 24" GB, but I'm also considering the 2002 Reverend Al (Alex Van Halen) ride. Has anyone here compared the two? I've seen conflicting reports, with some saying that the two are sonically identical, and that's due to the fact that the Rev Al is simply a Giant Beat finished to look like a 2002. Others say they are close but there are differences (ie, the Rev Al has more ping and a slightly different wash, etc). It's really difficult to tell in listening to various YouTube videos, because each cymbal in each video sounds different, and in listening to Paiste's sound files, while the two are close, there are definite differences. But, could those just be within the realm of cymbal-to-cymbal tolerances? I've discounted the standard 2002 ride as it's heavier than what I'm looking for and it seems like it would be a bit overwhelming in my practice room.

For reference, in terms of all the videos I've listened to, this particular cymbal is probably the most to my liking:

So I received the 24 A last week and here are some pictures and a crude sound file using my phone.

Not to respond to my own post, but per the above I pulled the trigger on a 24" AVH ride, mainly because I felt that the 2002 cosmetics would be a better fit at that particular location in the kit. The verdict is that it sounds virtually identical to the Giant Beat ride video above. In listening to Paiste's sound files, it sounds much closer to the Giant Beat sample than the actual AVH ride that they use, so I suppose I got lucky as that's what I was hoping for. If anything, it has a slightly more pronounced ping and a slightly glassier wash (the GB is more shimmery). Ultimately they are extremely close and I would tend to agree with those who claim that it's a Giant Beat wearing 2002 clothes.
You must log in or register to reply here.

41 minutes ago
Seb77
S
T
Who here has skipped/forgone learning doubles on the kick drum?