Too many snare wires?

"Back in the day", I remember when Gretsch was first to come out with 42 snare wires. I HAD to have them on my Slingerland Sound King! Is there such a thing as having too many snare wires? Overkill? Your thoughts.
M

No because all my snare wires come with snare drums attached and that is a good thing.....on the other hand I initially thought a 42 strand snare would be too much and it was....but then I reheaded an old Camco snare that I’ve tried a multitude of snares on...regular snares, George Ayotte snares, Hinger...and none of them worked to my liking.
Karma alert.......yes I took the parallel strainer/mechanism off and replaced it with a Ludwig p85....but really there were lots of Ludwig parts on Camco kits back in the day.. Plus the mechanism went to a very good drum and home btw....
Anyway I put a Skyntone on top, ambo snare side, and some generic 42 strand snares on and yoweeeeee!!!!!!! The drum lives!!!!!
bt 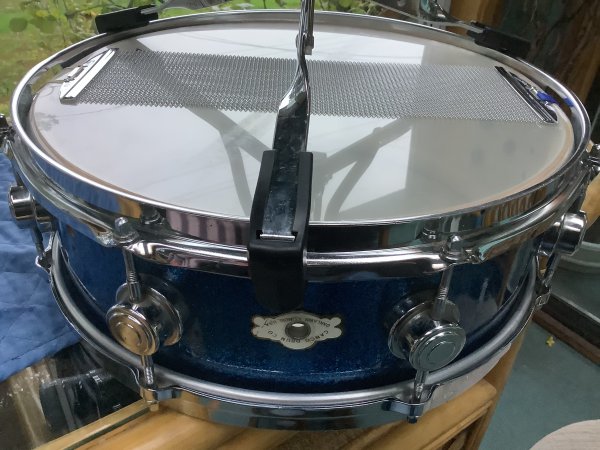 I like the 42 strands apparently that actually chokes the sound of the snare I don’t really notice it but it does seem to make the sounds tighter crisper to my ears!
I’d be curious to hear different widths on same snare back to back

It's always a crap shoot, sound-wise, to install snare wires that are wider than the snare beds. There's lots of online info about this. Snare drums that will accept 30-42 strand wires? Just about any US-made metal drums, such as Supraphonic and Acrolite snare drums. They have nice wide and shallow beds that work well with these wires!

Here's a picture of the snare beds from my 2012 "Brass Edition" snare drum. Those beds will work great with wider wires!

My first pro quality kit was a Gretsch kit and it came with a matching 5.5” snare . They had two kits the same - one snare had 42 strand wires and the other the standard 20 strand . I chose the 42 strand version . I was a young impressionable 17 year old and did not know a lot about things like snare beds and bearing edges and the like . I could never get a good sound out of this snare . It sounded horrible , boxy and insensitive . The snare went with the kit when I traded it in for another drum set . About ten years later I was talking to a guy in a local music store and it turns out he bought my old snare . He informed me that it had no snare bed or bottom bearing edge !! The snare wide head was a white head and I had never thought as a 17 year old take the head off an inspect it . I just assumed it was made correctly . Sadly that snare had soured me against wider snare wire sets since .
I have a friend that is a well known player in Toronto that loves the 42 strand snares and keeps trying to talk me into putting them on some of my snares again .

The only snare I ever had with 42s on it was a Dunnett. Now that I refuse to play his drums anymore, I don't have it. It sounded good but I did prefer fewer wires. Nowadays 20 is the most I use, and those are chrome plated "snappy" wires for when I want extra snarey-ness. I often prefer a little darker response and a little more shell tone, which means I tend toward German steel wires or sometimes Puresound Equalizers. I even have some Grover cable snares for those times when I want a lot more shell tone than snare tone.
S

I have never been pleased with the results of 42-strand wire, even on wide-bed drums like Acros and Supras. Maybe I haven't tried enough tuning options with them, and maybe I should expand my Gretsch horizons, but it always sounded like all snare and no drum to me. Then again, I like to buy cheap sets of 10-12 wire snares and snip several of the wires off.

This is why I want to know whether Yamaha is ever going to sell just the wire for the Gadd signature snare.
A

Get the Gretsch 42 strand. They’re on all my snare drum’s.

They're all tools that combine with other tools to meet the needs of different applications.

I've always used the snare unit included by the manufacturer (it's part of the drum's design) except for my Gretsch 4158. When I got that drum in 1984 it came from Gretsch with a 42-strand snare unit, and I thought it made the drum sound 'boxy' and lifeless, and it made the stick response sluggish. I swapped it for a no-name 20-strand unit and the drum's sound opened right up and it played crisp and light. Those 42 strands were just too much mass against the snare head.

I have 42s on most of my snares. I do a lot of rolls, drags, and ghosts. The extra rattle and wet sound is something I prefer usually.
You must log in or register to reply here.

Why is the used market FLOODED with PORK PIE Brass snares??