I am planning to cut my 14 inch floor tom down and convert it into a 5.5 x 14 snare. I found a local music store to cut the drum down and cut bearing edges for me. BUT they don't want to cut snare beds. So, here is my question...

Should I go to someone else that will do everything for me? Or, should I try and cut the snare beds myself by hand (Like this guy)

Keller Maple Shell that I finished myself. The drum is a 14x12 if I remember correctly.

Your video link doesn't work........what about just buy another wood snare shell? You may regret cutting your FT especially if it's already a full drum (and may match a kit).........

Why the heck would they cut a shell down and put edges on it, but not put new beds on it? That doesn't make any sense! Carving out a slight snare bed doesn't take any special tools or even much time. I say do it yourself, there has to be tutorial videos on YouTube...

I had a 10x14 Slingy 70's tom. I wanted a deep fat marching snare. I added my own (crude!) bearing edges - using sandpaper - and it worked fine. Nice fat sound and decent tone. However, it wasn't practical for me as a jazz player (both size & sound). So it is now a "bass" drum with wood hoops and I think think that drum has found its true calling! Nice low, punchy & compact sound!
C

JazzDrumGuy said:
Your video link doesn't work........what about just buy another wood snare shell? You may regret cutting your FT especially if it's already a full drum (and may match a kit).........
Click to expand...

I just fixed the video - how to do your own snare bed.

DIY-I did it on my last snare...I like the results....might be good to look at the type/style beds your fave snares have...

Agree with dtk ... I did one about ten years ago. Turned out really good. Extremely sensitive and also took a hit well. Very responsive. If you know what you're looking for in a snare, it shouldn't be too difficult. Just use your own hands, measure carefully, use a light touch, avoid power tools, and you should be fine. Heck, with a 14 floor, you get two shots at it. Have fun.

I had a Black Nitron 10x14 Gretsch tom a while back. In my opinion the 10x14 size is useless, I could't get it low enough for a floor tom, or high enough for a rack tom. And the depth made it very hard to position.

I gave it to Precision to make onto a snare. I told them exactly what I was looking for, a "big fat 80's" type of drum (without all the unnatural gating and reverb.) They applied this goal to everything on the drum from edges to beds, to rims, to head choice, to strainer.

It now sounds EXACTLY like what we were after, and whenever I need THAT specific sound, I pop up that drum, mission accomplished!!!!!! It is the wood rimmed Black nitron 6x14 on the middle shelf in this picture. 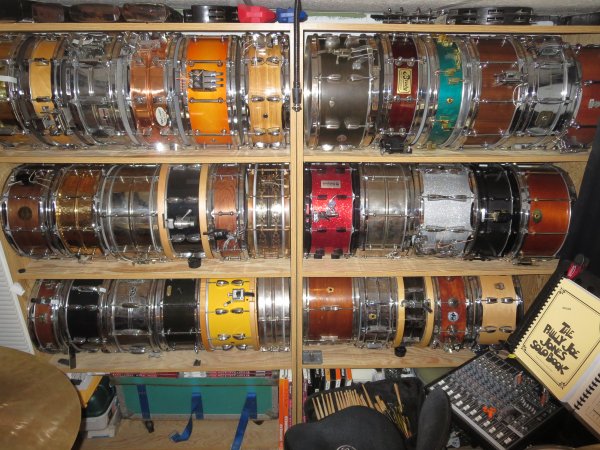 MSG, I wish had the remaining 4" to make a nice Max Roach Progressive jazz snare! Also, interestingly, I have a 10x14 on a Gretsch kit that I made an FT - it works great........

Yeah I thought about that, and was ready to do it, but (from what I remember) the best way to do the conversion was to take a few inches off of each end (for some reason, I forget why.) At the time I had four 4" snares so I didn't really need another, so that idea was scrapped.

I tried to get the 10x14 dialed into a place where I could have a use for it for MANY (!!!!) years. Different heads, different tunings.... Just as I said. too high for a FT and too low for a rack tom, and impossible to position in either capacity. So now its a GREAT and useful snare.

Hey congrats on the 1920's BB too. I remember playing mine for the first time. Don't worry about the little "imperfections" they won't matter after you hear it. There is NOTHING like that shell design combined with 1920's NOB (which just ISN'T the same as todays NOB!!!!)

I think Curotto told me to use 3 in 1 oil, or lemon oil (maybe that's the same thing, I forget,) and a soft rag, and it worked great on the whole drum. I used it on the black, the gold, the scroll, everything. It cleaned up GREAT, no adverse affects on anything.

Is $50 to get the drum cut down and the bearing edges cut a good price? If not, can anyone recommend a good person/shop to send my drum off to?
C

Ok, so the plot thickens. My neighbor has a table saw and a router table. He also happens to be a drummer. Should I/we attempt to cut this drum down and do the bearing edges ourselves? Or leave it to an expert?

He said that his router is not angle adjustable. But if we are only talking 45 degrees, he could do it with the proper bit. Any advice?

If it's a drum you really like, and want the project to succeed, send it to a pro (and recoup the money by not drinking Starbucks for a few weeks. HA!)

Have a professional (like Precision Drum or any other professional builder) do the cuts, edges, beds, and drill the holes for the lugs and strainer in the RIGHT places. Then you can assemble it if you want to.

If it's a drum you don't really care much about, have a swing at it yourself, "maybe" you'll succeed and save some money. Then again maybe you'll destroy a drum and have some fuel for a wintertime fire in the fireplace.

It's a free world, and we all need heat in the winter, but it's hard (maybe impossible) to fix the mistakes in the type of job that you are talking about once they are made.

The internet is littered with botched projects, and butchered drums by people who have "an awesome set of tools" and more money and time than sense or skill.

I don't know the brand of your FT or what it's worth to justify $200.00. Even if you get it done locally for $50, you still need snare beds.....if you're willing to sacrifice, then go with your neighbor but you get what you pay (or don't!) for. I still think for $200 and likely way less, you can find a very nice snare shell ready to go with edges, beds and probably lug holes (or they can drill them).

You could always not cut bearing edges and get a Dynasonic snare frame for the drum (if that's something you'd want to go for). The wood Dynas have virtually no snare bed, which would save you the trouble of finding someone to cut them right.
C

Ok, my neighbor did a great job on the cut and the bearing edges. He built a custom jig to cut the drum down from each side. Then I bought a MDF board and glued some sand paper to it to sand everything down nice and even. Finally he cut an offset double 45 degree edge with his router table. Came out really nice. And he did it for free! Next steps are to hand sand my snare beds.

cmrocco said:
Ok, so the plot thickens. My neighbor has a table saw and a router table. He also happens to be a drummer. Should I/we attempt to cut this drum down and do the bearing edges ourselves? Or leave it to an expert?

He said that his router is not angle adjustable. But if we are only talking 45 degrees, he could do it with the proper bit. Any advice?
Click to expand...

You need a chamfer bit for the router, it's a 45 degree angle, exactly what you need. Also, find one with a bearing on the point so it will ride around the inside of the drum, otherwise it will not be an even bevel. You can totally do this!

And has anyone every put snares on the bottom of a floor tom? I had this thought once. Really wonder what it would sound like. I figure not great, but curious.
D

I Play a 12" deep x 14'Dia. snare. It is on floor tom legs and it sits perfectly.
You can tune it medium and get that "fat backbeat" sound or crank it up tight and get a really loud "crack"!
I think you can see it in the picture.
It is made from a fiberglass shell, Ludwig P 85 strainer and buttplate and Ludwig Mach lugs. The legs and are from a brackets are Mapex .
Thanks
Lane

Cutting a shell this way???