It's interesting that this thread came up. I have Never played with two rides, but I have been thinking about it. I have one ride with a superb bell and another ride that is superb for stick definition. I would love both tones during a gig. But - I really like keeping things minimal, and neither ride would replace two other crashes. So, that would put me at 4 cymbals and stands - coming from the guy who prides himself on minimalist approaches and a small footprint at the venue.

One set up I sometimes use:
20 2002 Flatride on left
20 Traditionals Medium Ride or Signature Rough Ride on the right

Had been only using my 21" Sabian HH Raw Bell Dry Ride on my right side until recently adding a Sabian 22" HHX Ltd Edition 'Shimmering 75' ride produced for Jack DeJohnette. It's a crashable ride which I position just to the right of my hi-hats and adds a different voice to my cymbal palette as needed, in addition to my other crashes.
G

Old thread. I messed around with cymbal set up today (out of boredom) and played a bit with a 22 Renaissance on the left and a 22 MTL on the right. Anyone play with two 22’s only?
B

They ride, they crash, they crash-ride. I have just those two cymbals up alongside some 16" Lauritsen hats. I predominantly play rock.

My preferred setup features two rides on the right side with two contrasting characteristics. Usually one "clean" and washy and one that is "dirty" and on the drier side.

The old A Zildjians in varying sizes are my usual clean and washy primary rides and I have a few Agops and K Customs that fit in the other category.

The far right is the lower of the pitches and the trashier one.

I like to have a big crashable ride and an 18 or 20 flat, both flying off the same tripod stand, so they overlap but don’t touch.

GoMarkGo said:
Old thread. I messed around with cymbal set up today (out of boredom) and played a bit with a 22 Renaissance on the left and a 22 MTL on the right. Anyone play with two 22’s only?
Click to expand...

I think the ones I am using here are 23" (right side is a flat and left side is a regular ride):

Location
New Joisey. Wha? You got a problem wit dat? 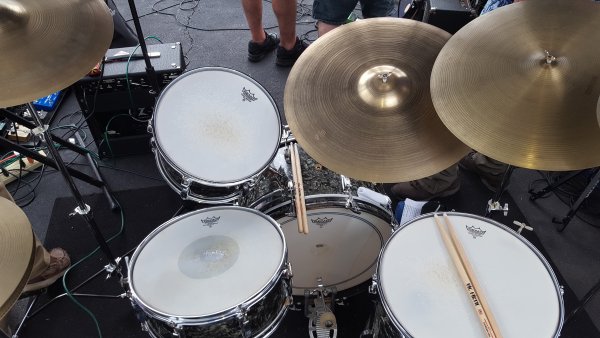 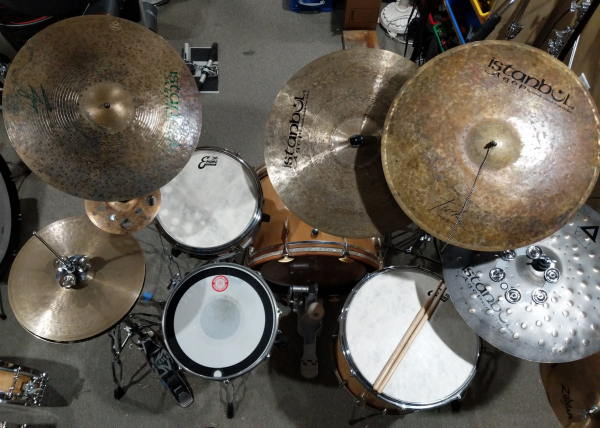 Yes, I run more than one ride. Usually something washy/wet and then something very dry with good stick definition. They are always next to each other, not left-right.

Of my 5 cymbal set ups, 3 of them contain double rides. In those three sets I will ride and crash each one and tend to place both on the right.

Bosphorus with 22" Master Vintage and 20" Black Pearl rides to my right.. 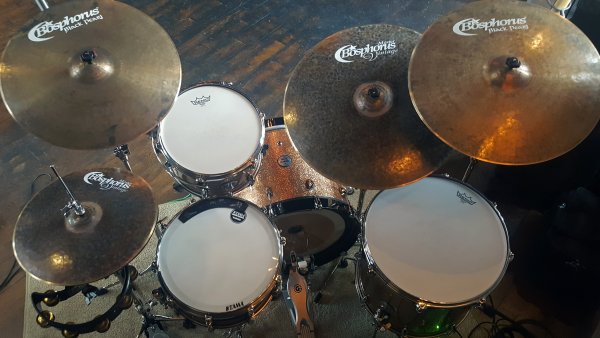 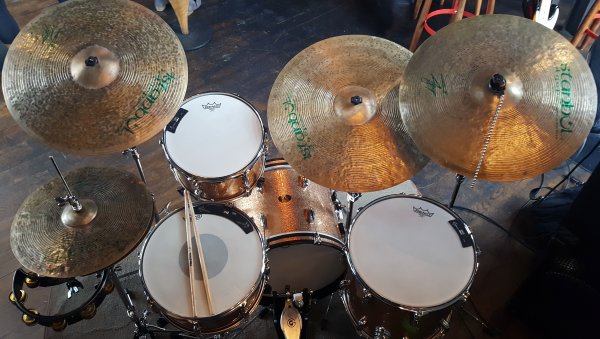 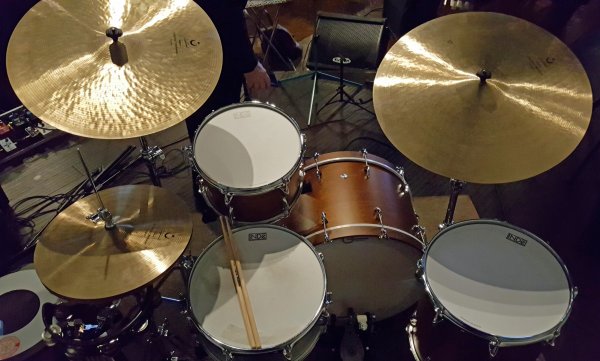 All rides all the time lately.

Right now I’m using three: a 24” Mehmet 61st Vintage and a 24” Mehmet MC Jazz overlapping on the right, and a 22” MC Jazz on the far left — left of my hi-hat. Trying to work more on open-handed playing, so this setup provides easy access for both hands.
O

The simple answer is yes, I always have two ride cymbals--one on the right and the other on the left. If I'm riding one cymbal and there's a change in the song, I want to switch rides.

The more complex answer is that it depends on what distinguishes a ride from a crash. I like both my cymbals to crash, especially the one on the left. It may therefore be a crash rather than a ride, even though it's there for riding too.

I have seen drummers set up a third cymbal, a dedicated ride, low on the right over the floor tom, and I've done this myself. But it was too much stuff for me to set up and I didn't do it often.
P

Depends on the gig as my set up tends to change a lot based on what I'm playing. But a "can cover a lot of basis" setup for me typically includes a "main" ride on the right, and a different ride (often darker, often a sizzle and often used as a crash as well) to the right of that, just underneath. If it's a strictly jazz gig, I'll often have three rides (third one instead of a crash on the left), sometimes or two rides and a china. 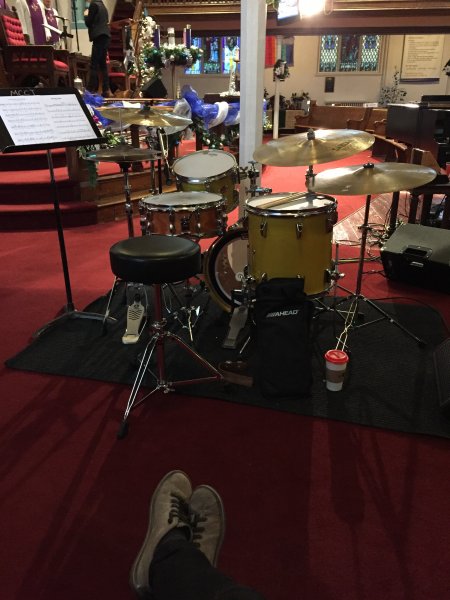 Current practice setup: Sabian 18" HH Extra Thin crash, Sabian 22" Thigpen Crystal Bell Ride (one of the first "real" cymbals I ever bought with my own money), and a 21" Calhoun Ambient ride with two rivets. (All relatively "quiet" cymbals, so works well for the basement!) 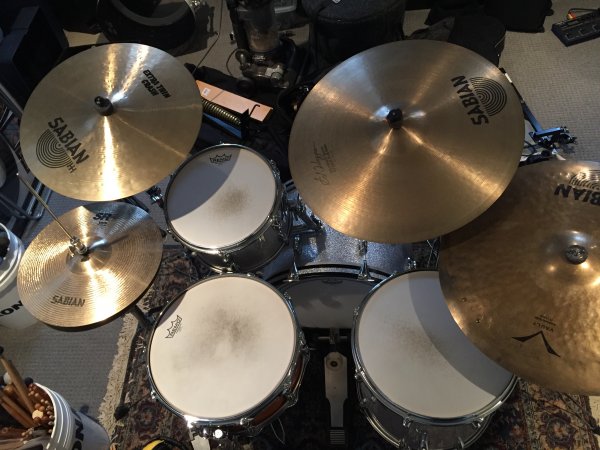 Don't remember the last time I bought a crash cymbal. Left side 20, right side 20 or 22. Weights vary based on the gig, but all varying degrees of crashable.
G

I have a brighter, higher pitch 22 on the left with a totally different bell and three rivets. It’s heavier than the 22 on the right, but it crashes very easily and very well. (Kcon Ren)
The 22 on the right is low in pitch with an integrated bell. (Kcon MTL). 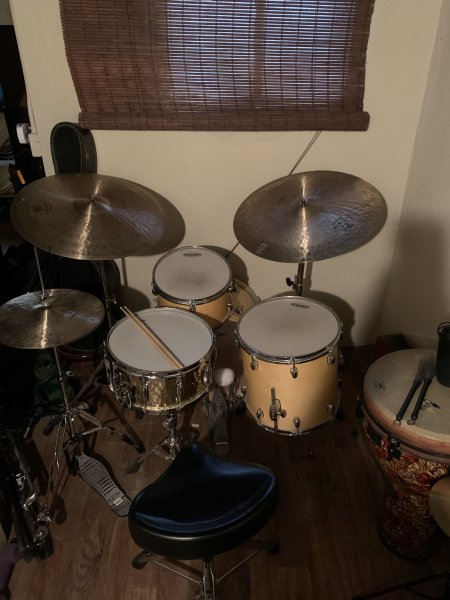