I see a 4 pc with, matching snare in 9/10 condition...22,13,15,5x14. Interiors are clean and there has been no monkey business with this kit.
They intrigue me because they have a Gretsch aura around them. I,ve seen nice Kents go quickly but for a lot less than the 900 he is asking.
ROP is very nice, so i could use some opinions from you Kenters!
S

What on earth is ROP? Right On Pete? Ready Or Pass? Random Onerous Person? Retinopathy Of Prematurity????
W

Ahh...before your time i see..

Well then. Good to know!
R

Dunno I'm heading to 70, and I thought it was a typo RIP and a post about "I just missed saving a Kent kit from the dumpster by 2 minutes..."

What does "Gretsch aura around them" mean?

Gretsch "aura" because the Kent Brothers once worked for Gretsch? Thing is, you don't see any of that in the drums they made for Kent.
I was given a new set of Kents in 1968. Revisited them 3 years ago and quickly tired of them. The build quality is rarely there. With all of us original
Kenters now into our 60's and 70's.....who's going to carry the Kent torch on $900 ROP drum kits? If the build quality on this kit is way above average.....
and there are actually rounded bearing edges on the shells, and they sound nearly as good as USA made 60's drums....maybe that's a winner.

Didn't Druggans have a set like this on Reverb the past couple months? I don't see it listed or reported as sold. It was around the $1000 mark and it was a very unusual finish.
W

Considering a lot of players drop 1k on a snare drum, 900 for a 4 pc seems fair.

I just don’t see it. I’ve owned a bunch of Kent drums. They have a certain charm but when Slingerland are going for less than that I can’t see it. The snares are nothing special unless you really want that sound. Too many quality control issues and in the end the sound just isn’t there.

Buying them to re-live the past, I'd do it.
Buying them as a player kit, probably not.

9/10 condition, complete kit, $900 sounds fair for a piece of the past.
AND their Red!
I don't remember seeing anything but Sparkle finish on Kent's.
Last edited: Aug 4, 2022

900 bucks isn't terrible. But it isn't great either. If for some reason you really, really want a Kent set then sure.

multijd said:
I just don’t see it. I’ve owned a bunch of Kent drums. They have a certain charm but when Slingerland are going for less than that I can’t see it. The snares are nothing special unless you really want that sound. Too many quality control issues and in the end the sound just isn’t there.
Click to expand...

I can't see spending i$900 on a Kent unless it's the Holy Grail of Kents that plays like a good Slingerland/Ludwig from that era. I don't expect any Kent to sound like a Gretsch or Rogers.

Here's that raspberry swirl kit that Druggan's has. It's on EBay only. $1150 shipped/taxed. With a 6 lug snare and bass drum....not as cool as the 8 lug versions.
But this is a great looking kit. I wonder why or how the 8 lug floor tom got grouped with the other 6 luggers?? For rarity and consistency.....I'd probably prefer to have the 6 lug FT for a complete "match."
These shells are usually dated in the mid to late 1960's. No mention of that though in the for sale listing. 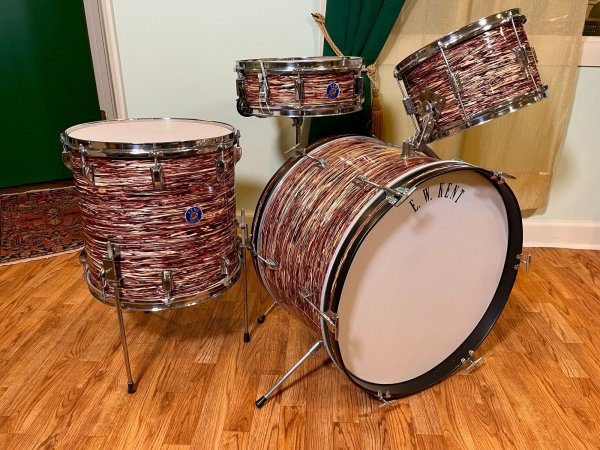 Six luggers on both drums gives it that Pioneer vibe. I agree, 8 lugs would offer so much exrea room for tuning. That finish is great, and i,ve always ignored finishes when it comes to a purchase. ....Better give my head a shake!! I asked if they would leave out the snare, and they said no.

The six lug bass drums are always a problem for me. And the hoops are thin and usually warped.

After recently restoring a Kent snare, all I can say is that just about anything else would be better. Nothing like Gretsch at all. The thin shell is nice, but you'd have to redo the edges and replace every single part on it except maybe the lugs if you actually intend to gig it and not just put it on a shelf and admire it. Back in the 1980s, we avoided them as used drums. Slapdash quality, often even worse than comparable MIJs, but priced higher because they're made in USA. Other vintage American drums are just as nostalgic, but they are functional too. Kents are for nostalgia only. If you didn't own one back in the day, you'd probably prefer just about any other American set. Yeah, they're still kinda cool. Yeah, you can tweak them and get a decent tone. But I wouldn't pay serious money for them.

multijd said:
They have a certain charm but when Slingerland are going for less than that I can’t see it.
Click to expand...

$4-500 on a good day....have my original kit, been thru the plant, refurb'd, recut, replaced...nostalgia only as it was my first kit, however condition & finish is a bonus....Mouse may chime in...