What Caused Drummers to Start to Seek Vintage Drums?

I'm an old fart, but, I don't want any of those old vintage drums. lol
S

Jazz Drummer said:
In 1978 I ordered a new SONOR Phonic Rosewood 18/12/14”, at the time the most expensive drums money could buy. I have played my rear end off to be able to afford it. Poor SONOR quality (all lug screws were loose) upset me and made me buy my first vintage drum, a 1961 White Marine Pearl LUDWIG Super Classic snare drum. I sold that SONOR set to my drum teacher in 1979 and have not touched a SONOR drum ever since.
The main difference to me, vintage drums have aged woods, were hand-made to a large degree and they do have a "soul" which mass production drums from Asia cannot have. Also, light hardware. In terms of quality, nothing beats pre-serial Keystone LUDWIGs (early 1960s), PREMIERs up to the late 1970s, SLINGERLANDs up to the late 1960s or French ASBAs up to the mid 1970s. GRETSCH is not on that list, they just sound good. I have restored over 150 drums by now and I have seen quite a bit, good and bad.

I have played that set for 30 years, originating from the RadioCityMusicHall NY, the widdow of the house drummer sold it, never saw the sun (very little fading if any at all). It took me about 18 months to find a new Ludwig-friendly home in Cologne, Germany, to get a decent and fair price.

There you go and I am German, it is the truth. Sad enough to say the least.
E

complete kits that got sold and someone kept the snare drum

In my case, "vintage" started out as "used". When I started drumming, "vintage" meant strictly Black Beauties and Rolling Bombers, and only a few old guys were hunting those. 1960s Ludwigs and Slingerlands were just affordable used drums. My choice of gear was a matter of penny-pinching and reverse snobbery. I felt good about kicking ass on an old set that I fixed up myself and didn't pay much for, unlike some prissy guy with his brand new Starclassics who couldn't even change a lug nut. I never felt the need to overpay for some fancy new gear, and old drums, with their unique look and sound, reflected my contrarian personality. I was one of those kids who never cared about fitting in and usually preferred to go my own way. In fact, I didn't appreciate it when "used" suddenly became "vintage" and everybody jumped on that bandwagon.

I have two nephews who both play drums, one is thirty nine, his brother is thirty five. They have both been around my my vintage gear and my new gear their whole lives, the younger one even worked as a drum tech/roadie for me for years. They both covet my DW Collector Series kit, but neither one cares at all about my Radio Kings, Dynasonic, Gretsch Round Badge, Leedys or any of the other cool vintage gear that I own. To them it is just uncle Mike's old drums. It's sort of sad.

My first "good" drums were 1960s Slingerlands, so I've always had a soft spot for them. The other vintage gear called my name because of reading about my favorite drummers using "vintage" gear on recordings. I do appreciate the sound, but the hardware is usually annoying.

I think that nostalgia plays a big part.

I'm expanding my newer kits (DW Collector's Series and Gretsch USA Custom) into shell banks, and getting rid of all but one vintage kit because I'm out of room. I'm keeping my vintage snare drums for now, but everything is geared to what I'll use for live performance.

Radio King said:
Here it is:

I helped his tour manager load the aforementioned Slingerland drums onto the bus when I saw Buddy play in 1985. I then got to meet Buddy one-on-one. It was a cherished memory for me. ^^He says they sounded better than anything they make today. I agree, it's a huge misconception that you need new drums to sound great.

#1 reason: VALUE. the made so many Ludwig kits in the 60s after the Beatles. They have increased in value a bit, but still accounting for inflation and compared to new drums, used drums are a fantastic value. A drummer's gotta have drums to play drums! A kid sometimes can't afford to pay for a brand new set. They made so many drums of great quality back when, and how many of them are still played by original owners? A minuscule percentage.

Sure there's expensive vintage drums, primarily from demand and rarity. But if you look at the overall used drum market, they are outliers.
M 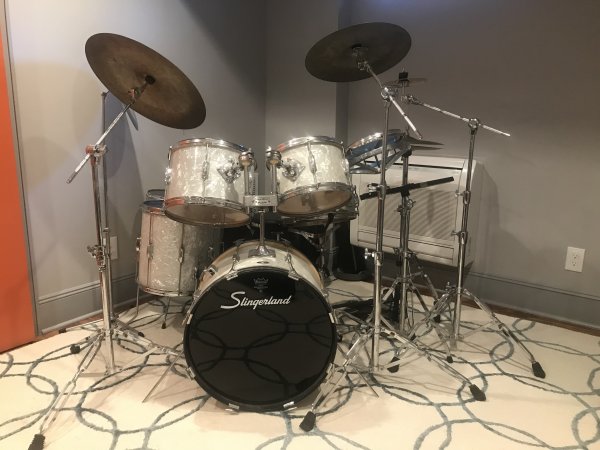 I started playing drums during the Japanese invasion so for me I was into Tama & Yamaha. Old farts played Ludwig & Slingerland. Back in the mid-late 80’s I started receiving this list of vintage snare drums from Vintage Drum Center of Iowa. I remember being shocked that a 1920’s Ludwig BB was going for $800 , man I wish I had bought a few of those back then!

My first vintage snare drum was a 5x14 1970’s Gretsch COB that I bought from Ned.back in 1991. Little did I know it would cause me serious GAS!

It was also around this time chasing a tone I had in my head that my Yamaha Recording Customs weren’t giving me as well as the Tama Granstar Customs I bought to replace the Yamaha kit. I sold the Tama kit and bought my first vintage kit, a 1970’s Gretsch 26/13/14/15/18 kit in walnut. It was close to the sound, real close but the bass drum wasn’t quite it, probably the huge 26 was the culprit. So I traded it for a funky little Camco kit 22/14/16 ( 14” mounted Tom) w/ matching snare.

That’s it! That’s the tone! I’ve been a Camco and vintage drum junkie ever since!

Bottom line is it was tone that led me to vintage, a tone that can’t be found on modern drum. That led to collecting so now it’s also value and an investment that has almost always paid off when it’s time to sell.
K

Targalx said:
I was watching a Rick Beato video tonight and they were talking about how guitarists in the 1970s started seeking guitars from the '50s and '60s because the major manufacturers in the 1970s weren't making new guitars with the same quality or playability or materials as those they produced 10 or 20 years prior. Also, at the time, the "vintage" guitars were actually cheaper than the new guitars.

What made drummers start to seek vintage drums? When was that turning point of "maybe we should start buying older kits" instead of new ones? When did newer not necessarily mean better, and why was that the case?

Here's the video link (they talk about the start of finding vintage instruments around the 8-minute mark):

After purchasing several late model Drum kits from many manufacturers, I could never achieve the sound I was searching for. I tried changing drum heads rims, mounts and still the sound was choked... I was struggling to get back to the sound I had enjoyed years ago.

Here is what I discovered. Late model drum kits seem to have bearing edges and tension assemblies which have been modified to obtain a sound more conducive to studio conditions (fast decay) and less conducive to live performance.
In order to obtain a live performance kit, one needs to search out drums made before the change to what I call "studio drums".
Most of the newer kits I have owned, the toms sound muddy. I think its because they have such rapid decay designed into the bearing edges, and the mounted tom lengths are short. Further, they are very difficult to tune. 1/8 of a turn will cause the mounted toms to loose tone and sustain. I got tired of fussing over drums which simply were never going to provide the sound I was looking for (Full tone with lots of sustain)

Kits I have discovered which provide good live sound (of course I have not tried every kit made)
Yamaha YD-7000 (1970s) .... I have not had the chance to play the YD-5000 kit
Yamaha YD-9000 (later called recording custom) 70s through the late 80s (have not tried any 90s kits)
Yamaha Stage custom (1996 until they changed to the dual lug and birch kits)
Yamaha The current rydeen kit (although the bass drum hoops will need to be replaced, along with the bass drum spurs and tension rod claws, further the larger tom bearing edges might need to be lightly sanded with fine sandpaper) ... I'm not really a fan of 6 lug floor toms...

Sonar 2007 kits (birch) probably a Mapex made kit, the tom mount is a contraption but the drums sound excellent for live play, I think Ludwig sold a version of this kit under the accent name.

I was specifically not looking for the old Ludwig sound and never cared for Slingerland, Rogers or Pearl sound (those three all sound the same to me). I never have played Grestch or DW drums so can't comment there.

What I found that worked for Me
I was specifically looking for a full rich tone and long sustain, from the bass drum and toms.
I wound up with a mixed kit that provides exactly the sound I was searching for
Yamaha - YD-7000 toms
Yamaha - Stage Custom Nuevo 8 inch tom (Its a 5 lug tom)
Yamaha - Power Recording Custom bass drum (I also have the YD-7000 bass which sounds great but is not power depth)
Yamaha - Concert series steel snare although I would also consider a Ludwig superphonic which I have used in the past
Live play with this kit is phenomenal, each drum has its own distinctive voice which can be distinguished when played in a live setting

Disbanding or delamination of the shells and Drum Wrap (laminate) damage
Most of the old Ludwig and Slingerland drums have problems with the reinforcement rings disbanding.... Further, the wrap used in the 60s, 70s and 80s is faded and cracked... Its a pain to remove as they glued the laminate to the entire drum shell at that point....

Rusted Pitted hardware
The other item which comes to mind is hardware, which often is pitted and rusted from exposure to the elements over the years. Finally, there are early rockers who removed the resonant heads from their drums and left the bearing edges exposed, many becoming damaged. Although I have replaced old hardware with newer hardware without any issues.

I settled with Yamaha vintage drums because I knew they finished their drums inside and out in the 60s, 70s and 80s. and most were not laminate coated. This approach protected the wood from delamination, and I could live with external scrapes, scratches and gouges, plus Yamaha quality has always been the best... Finally, the current Yamaha hardware fits their vintage drum shells ... so for me personally, it was the obvious choice.

I settled with Yamaha vintage drums because I knew they finished their drums inside and out in the 60s, 70s and 80s. and most were not laminate coated. This approach protected the wood from delamination, and I could live with external scrapes, scratches and gouges, plus Yamaha quality has always been the best... Finally, the current Yamaha hardware fits their vintage drum shells ... so for me personally, it was the obvious choice.
Click to expand...

I agree. The Yamaha builds from 1977 to the early 1990's are pretty sweet. The RC's are very pricey though. The relative value of the 7000 and 9000 series drums is excellent....same quality....and fairly similar tones to the RC's. I'd toss the early Tama Superstars right in there too.
You must log in or register to reply here.

How is everyone holding up? What are you working on during this downtime?
2

Ludwig Hammered Acrophonic snare drum. Who's got one and do you love it?

Outer play of this Slingerland tom. Mahogany or Maple?