What Elvin Jones CAN (could) do!!

In light of some recent threads that have leaned toward a negative take on what some of our drumming heroes can’t do, I want to offer some songs, grooves, ecstatic jubilations that one of my drumming heroes CAN do!! Here are some immediate favorites from the discography of Elvin Jones. Expect more from me and please add your favorites!!

This has been a favorite of mine (the entire album) since I bought a cassette thirty something years ago. (The cassette is still going strong along with a used library vinyl copy). I love the fluidity and hybrid Latin feel he gets here. There are references to all kinds of jazz and Latin influences including his own signature rolling triplets. It’s all wrapped up in an intense and grooving 9/8 feel.

A quick tempo excursion on a challenging yet rewarding Woody Shaw tune. Again this entire album is worth both enjoying and studying. Monk’s dream has to be one of the greatest organ drum duets in recorded jazz history.

That's such a great album

I love this entire collection. It sheds a different light on his playing. More “straight ahead” maybe? You can really dig his swing feel here. I especially love this tune because of his wonderful hihat phrasing. I don’t know of anything else like it!! And Lee Konitz!! This shows the understated side of Elvin. He could erupt with intensity when playing with Trane or Wayne. But he knows just where to go when confronted with the delicate phrasing of Lee.

slinginit said:
That's such a great album
Click to expand...

People who rant about what a [insert musician] can't do completely miss the point of music.

A non-musician buddy watched the clip from "Beyond the Lighted Stage" where Mike Portnoy stated at one point in time, "La Villa Strangiata" WAS the peak of by which rock drummers could be measured. As such, he uses this quip to negate other great drummers against Neil Peart who will always be the g.o.a.t. (in his small world).

When discussing Steve Gadd or Ringo Starr against the inevitable clincher, "Are you saying that Ringo Starr could play 'La Villa Strangiata' better than Neil Peart?" My response was simply, "No. What I'm saying is that Neil Peart can't play The Beatles." His brain blue-screened like Windiws 95 trying to process that response.

Juju. I have it and love the shuffle feel on Deluge

Read a book about the creation and recording of Coltrane's "A Love Supreme." JC had been working out compositions and concepts for that album during live shows preceding it's recording. By Elvin's estimation at a rate of 2-3 shows almost daily for a year), they rehearsed ALS over 1000 times before recording it in the studio.

slinginit said:
Read a book about the creation and recording of Coltrane's "A Love Supreme." JC had been working out compositions and concepts for that album during live shows preceding it's recording. By Elvin's estimation at a rate of 2-3 shows almost daily for a year), they rehearsed ALS over 1000 times before recording it in the studio.
Click to expand...

What book is that? This one? 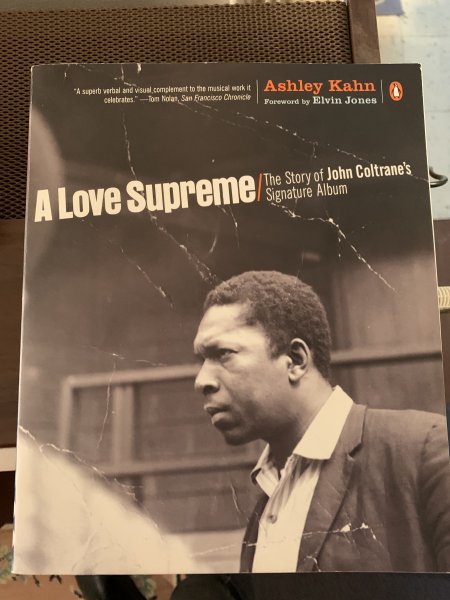 I am a relative newcomer to Elvin - having only been into his drumming for about 15 years now. I am more and more impressed every time I listen to him. I recently finished "Notes and Tones", the book of interviews by Art Taylor, and I really liked what Elvin had to say about the craft. And, I'm making my way through A Love Supreme: Live in Seattle. I know I'm supposed to be blown away by Coltrane's playing and compositional forms, but I keep getting sidetracked by Elvin's incredible accents.

I like this thread. The disparaging of drummers for what "they can't do" is so foolish. One reason I think we love Elvin is that he decided who he wanted to be and stuck to it. Here is some more of his amazing playing:

Love the whole gig of the thread, except it is....

There wasn't much he COULDN'T do. His playing takes you to another world.