What is the Best Sounding Steel Snare

I have a large snare drum collection but only have 2 steel snares: Super 10 and a Sonor D506.
I am searching out a couple of more and would like some opinions are to the best sounding steel snare drums.

thank you in advance

Looking forward to the replies...

I have a first generation Pearl Free-Floating 6.5 x 14 with steel shell and it sounds amazing to my ears. Bright, articulate, etc. I also have a 1983 Tama Mastercraft 5 x 14 (cast hoops, extended wires, etc) and would love to find a 6.5" someday. Too cheap to pay what they cost now.
K 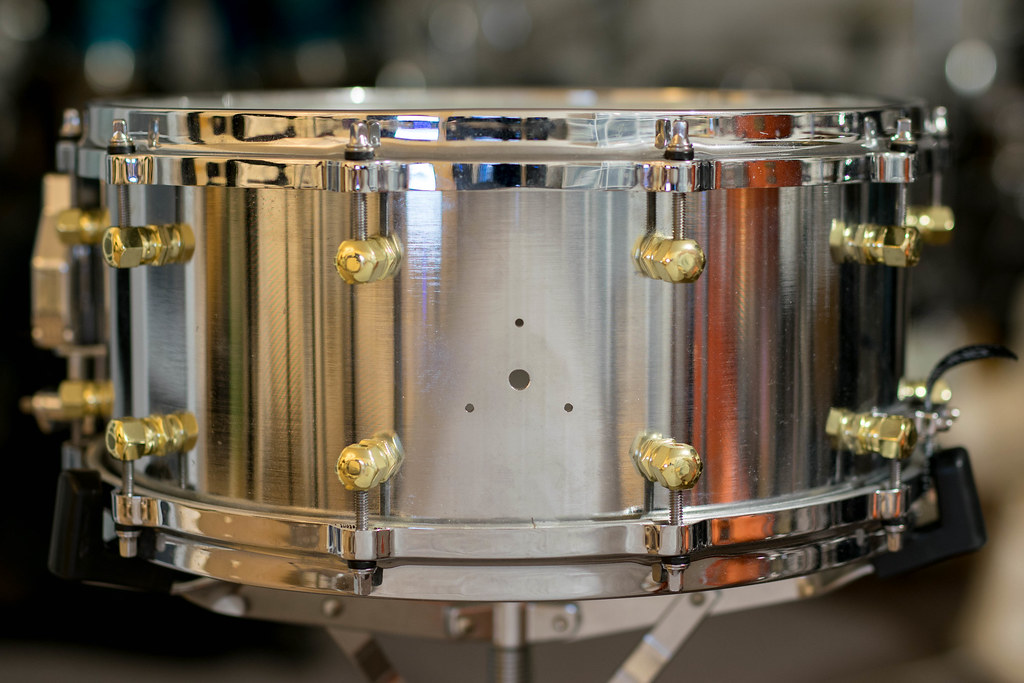 Just before lockdown I snagged a Swingstar snare which I believe has the very same shell as the king beat. Haven't managed to gig with it yet but its a heavy duty drum. What hoops are on your king beat and what heads you running on it ? I put on a new Emperor on mine but that was almost too snug a fit and it was a wrestle to get the head seated.

I think the Yamaha RC Steel snares are some of the better ones out there.

This would’ve been my answer as well. I have the “super sensitive” version and love it. It is HEAVY. Die casts top and bottom. I generally run a coated Emp on top, but for a while I used a vintage calf Head and it was glorious on that drum.
P

i'm a ludwig guy, but those old tamas are the real deal.

I own an earlier 80's 6.5 x 14 TAMA Mastercraft that won't be leaving . I've had the 5" Imperialstar with the regular wire system . The SS Mastercraft extended roller adds it a bit more of everything . Seamless shells both . The Mastercraft came with cast hoops top and bottom , I switched the snare side for a Yamaha aluminum but use the original on top .

The Rogers Supertens are outstanding too .

But of course the Supraphonic and Dynasonic should get a nod. Though tuning the Dyna can take some time. I tried the Dyna for about 6 months and finally tired of it. Always seemed a bit choked and overly dry no matter how I tuned it.

I'll toss a Slingerland in here......the Aluminum 8/10 luggers from the late 60's to 1970's. One of those 8 uggers just pushed my Supra off the Jazz kit snare stand. Quite a rim crack and snappy resonance to that little "student" snare drum.
And it's using the original cheap plastic Slingerland heads and 16 strand wires. And it's a precise and loud beast. I don't think it's as dry as an Acro though. Very similar though. I tried a Slingerland Super Sound King brass....just didn't like it.
The simple throw and snare wires on the Slingerland aluminum gives me less snare buzz than the Ludwig metals. It's just an easy drum to tune and play.

The Ludwig Supralite is a sleeper, especially the 5x15....and very reasonable....

I’ve had the Mastercraft and the King Beat. Currently I have a 6.5x14 10 Imperialstar Steel with the same shell but with a basic strainer. I also have a 5x14 Mastercraft (again, same Seamless Steel shell) that I bought for $40. I added some lugs and a basic strainer. They both sound superb. Some of the best sounding drums regardless of shell.

The Vintage Yamaha Seamless Steel snares are great too!

Glassman said:
I have a first generation Pearl Free-Floating 6.5 x 14 with steel shell and it sounds amazing to my ears. Bright, articulate, etc. I also have a 1983 Tama Mastercraft 5 x 14 (cast hoops, extended wires, etc) and would love to find a 6.5" someday. Too cheap to pay what they cost now.
Click to expand...

You hit the holy grail of steel drums.
You must log in or register to reply here.

Two gigs in one week after a 14 months of none.