This was my recent trip back into the 1930's. Though, in any "reputable" shop I'd expect better organization than this. They are all Zildjian 1st stamps. All were placed carefully into position for the at home.... "group" photo. 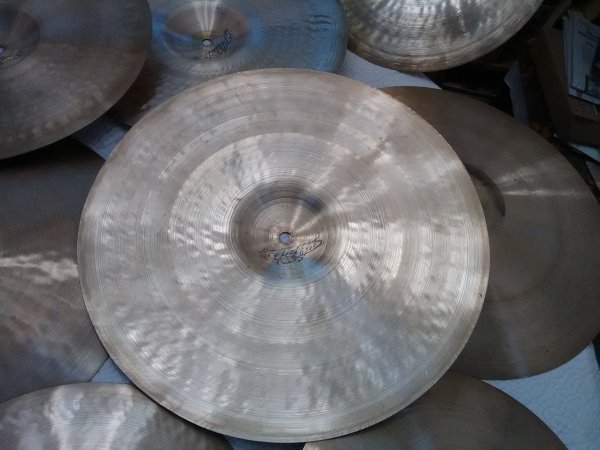 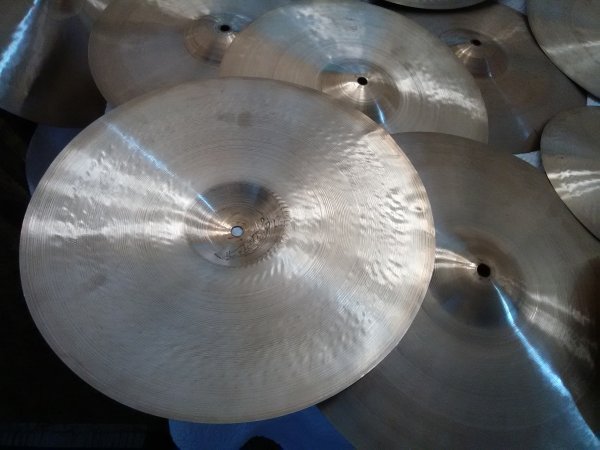 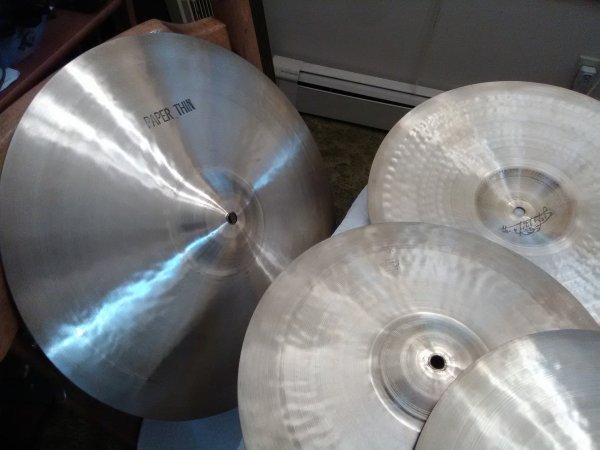 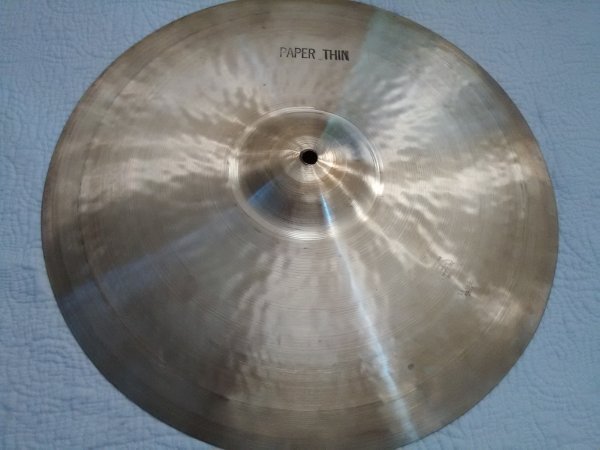 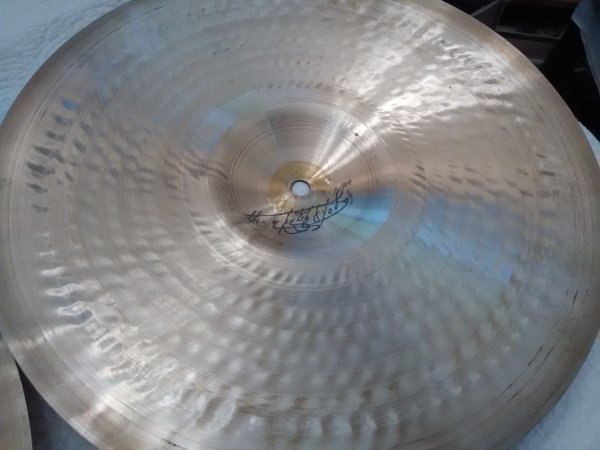 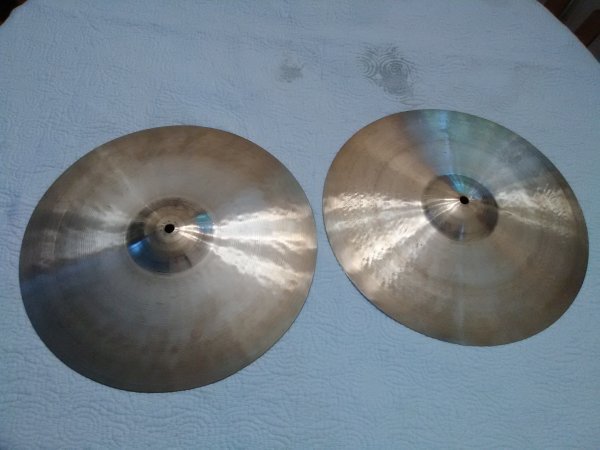 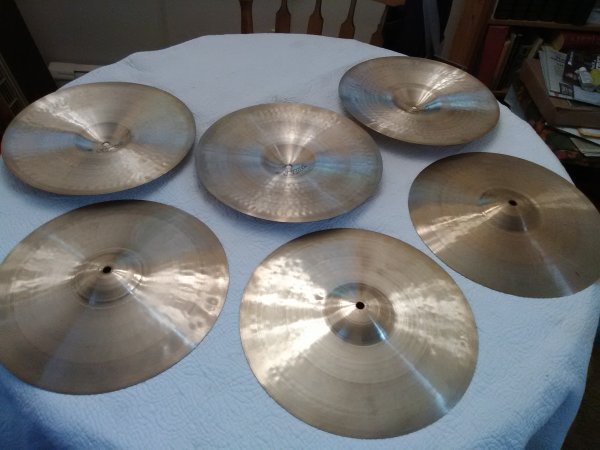 Last photo is of all the 13's together.

Look nice. Good for you. Those look like fun to play.

Probably most or all of them are "too nice" to play....sort of a Catch 22. But I knew that going in. The tone on all the paper thins is excellent...no substandard ones. The 16" crash tone is just superb imo and ride worthy with a pretty clear stick. While the 13's could be hats, though very sharp/bright ones, they have such clear and musical, bell-like tones, those could also be ultra small rides. Zildjian made some fine quality cymbals back then.

I would call nearly all of these essentially NOS... just finger prints and minimal scattered surface marks. If only these cymbals could talk as to how they remained in this condition over 80-90 yrs. I had initially considered only buying a few of them. 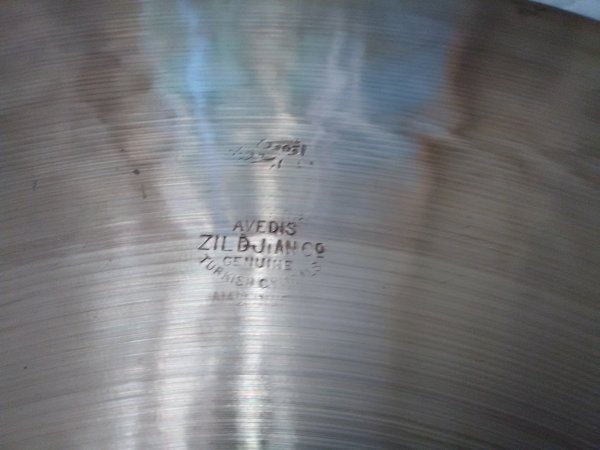 Damn man. That is too cool.

Did you acquire them all at once or something? What's the story?

Bought all at once this past week.

A listing for some cool looking and minty fresh older North American K's popped up on Facebook this past Saturday morning/afternoon. I was first to message on them. And would have bought them had they been available to show them that Saturday. But as luck would have it I didn't get a response to some questions until later Sunday morning. And for me, too late to wander out at 3-4 hrs round trip. So I hoped those K's would be there by Monday or later. They sold Sunday afternoon to a drummer friend of mine. And it turned out the seller had a bunch of other cymbals waiting to be listed for sale as well....in particular these old A's. That was a surprise. My friend bought a bunch of cool, collector quality cymbals. He contacted me Sunday night asking for some info on the A's including stamp era, etc.

Over the next couple days we exchanged messages on the various cymbals including potential prices if made for sale. And last night we started talking price on a few of the A's and K's. Then I figured why not put a sizable offer on the table for all the A's? What were the odds I'd ever see anything like this again? So we came to an agreement and I drove up today to check them out. They were every bit as minty fresh as he described. A number of them seemed like they came off the production line this year. I was told the source for these was a long time, salesman/rep in the cymbal industry who had formed an accumulation/collection of "interesting" cymbals. The owner had passed away and now the cymbals were being sold off via a friend, also a drummer. I was nice that my friend contacted me as soon as he bought them. Otherwise, I'd have probably only found out about them when they eventually popped up on Ebay or Reverb. So in the right place at the right time. A good lesson (and reminder) that if you don't ask, "what else do you have for sale"....you might miss something neat. My friend must have asked that question to the seller....and cymbals rained down. I wonder if I had been first to the K's being offered would I have even found out about the early A's the seller had?
Last edited: Jul 25, 2020

wowee, this gets my vote for the most incredible gear score I've seen in years.

I'd play them in a heart beat all day long... kindly.

Amazing!! I have a 17" early stamp A. It's pretty heavy. Makes a nice ride cymbal.

We all have our preferences, but for me those just might be the most beautiful looking cymbals I've ever seen.
Nice work, man.
You gonna make a soundfile?

Wow! A spectacular score! Were these purchased from someone south of Boston?

My cheaper IPhone doesn't capture the sound well. Always makes them sound harsher than they really are. And these brilliant old A's aren't that FAR apart in tone that similar ones I have which have medium to deeper patina. In comparing the 600's gm - 15's to my "dirty" pair of mid-700's 15's I noticed that the heavily used ones seem a tad more bendable. They sort of melt in your hand. The newer ones, despite being lighter, don't feel any "floppier." I suppose that's the difference from being played and handled for decades vs. a nearly new cymbal that is probably not even broken in?

Close ups of the hammering. Look more like K's than A's. 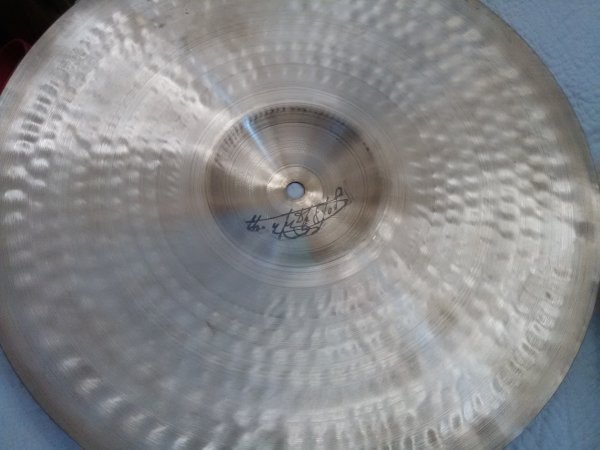 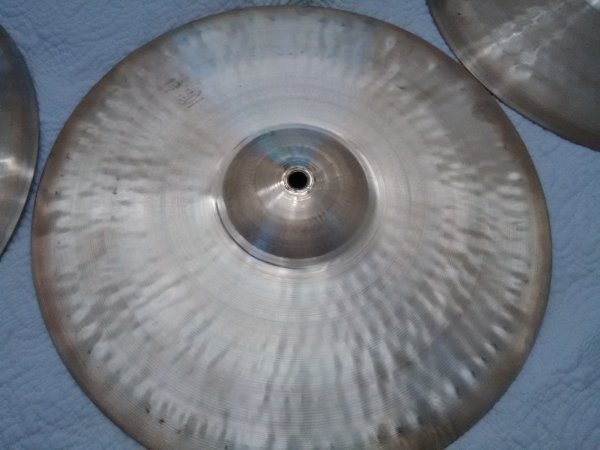 Pounder said:
Amazing!! I have a 17" early stamp A. It's pretty heavy. Makes a nice ride cymbal.
Click to expand...

You should post of pic of it and/or the stamp. The 1st and 2nd stamps are pretty similar....but with obvious differences, esp. in the Ottoman script. Finding either in 17" and larger sizes is really hard.

Those are stunning! Incredible hand hammering on them - very old K like.

Here are my 12” First Stamp hi hats. Signatures are strong on both. A prized possession for sure. 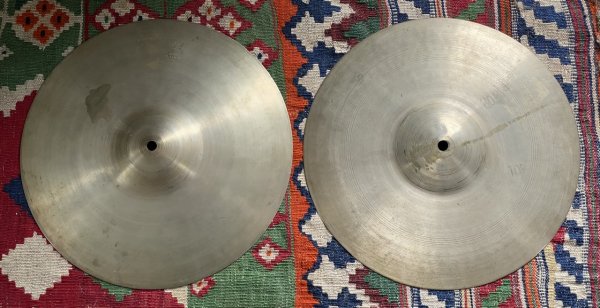 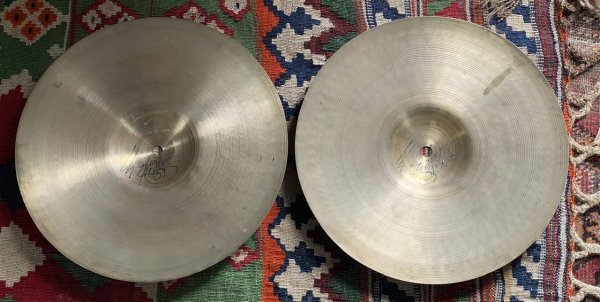 Or maybe turn of the century (1900) European city, music shop and the wooden crate just arrived from Turkey. I’d like to be there!!
You must log in or register to reply here.

HUGE Thanks to forum member Tuckerboy!

2
Looking for 14 dark hats to record

WFL Mystery Surprise (player/resto questions, not for the purist!)

Today at 6:14 AM
pedro navahas