What kind of stick bag do you use?

Matched Gripper said:
Are they leather inside and out? May be more valuable than the drums inside.
Click to expand...

haha .... yes, beautiful hand-stitched leather throughout. The stick bag, at least, is more valuable than the sticks but the cymbals and snare cases are a fraction of their respective contents ......but the whole set was paid for by a gig at a Marriott sea-side resort ....

I have a half dozen or so stick bags from Protection Racket , Ludwig , Sabian,Tama and one made by a friend’s wife .

Their roadie carries it like the Japanese formal ceremonial presentation of a Samurai sword to a new loyalist!

Like DanRH, I use the DW Erskine bag. I originally bought the Yamaha Erskine bag, and after a drunk guitarist broke its back Yamaha sent me a new one (I'd written to them with a couple of suggestions for improvement that were actually implemented on the DW model). Then my replacement bag was stolen when my car was broken into, and I bought the DW with pedestal. Great bag, but I did modify it by making the bumpers on the table top larger to keep sticks from rolling off.

I'd take a picture but it's in the van waiting to go to a gig.

Forgot to ask, what brand are those ridiculously gorgeous leather bags?

Ahead Deluxe Stick Bag. My only complaint is the plastic bolt snap that clips onto the floor tom lugs. I complained to Ahead when one broke, and they sent me a metal one at no cost. They should just charge $3 or $4 more and put metal ones on in the first place.

ThomasL said:
Looks like many of you have bags without a shoulder strap. How do you carry them?

Yup, I got her to carry my sticks on occasion.

Basic black canvas Promark stick bag. Not worthy of a photo but holds all my stuff hung on the FT....ok here's photos.... 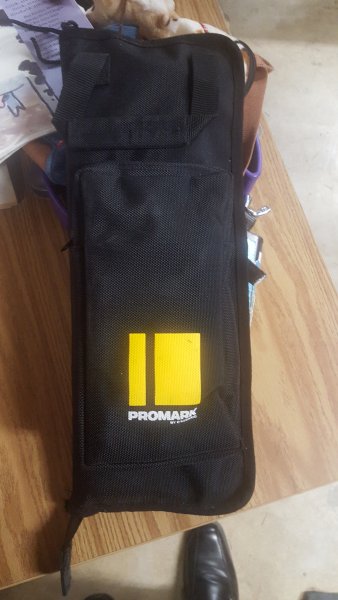 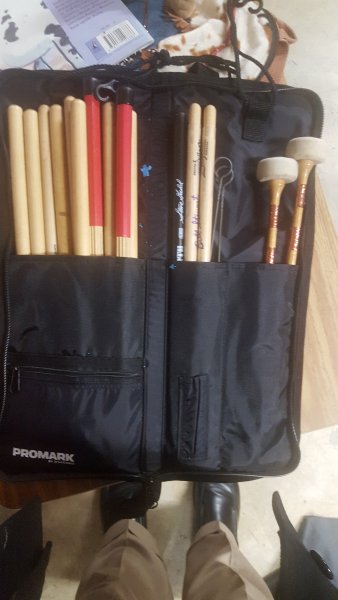 I've been using a Meinl stick bag since 2016 and it still looks brand new. Very solid and not too expensive either. Our singer's brother in law also uses the same one.

Now that Peter Erskine is with Tama, I wonder if they'll issue a new version of his signature stick bag. I'd really like to get another one.

So a little more looking informed me that Erskine actually made this move in 2015, I guess no signature bag from Tama, given six years with no activity on that front. Ah, well.

Just went downstairs to check .... I have a Pro Mark bag for sticks and brushes and a Ballter bag for mallets .

I bought the Tough Traveller bag in May of ‘90 the week of my wedding and it finally got tired around June of this year. Seeing that TT values the same bag at $155.00 I tried the $40 Vic Firth bag. I was so uncomfortable with the VF bag that I ponied up the $$$ for the Tough Traveller two months ago… My old TT bag is my “in the van” bag (in response to a nightmare) and the VF bag leans against a wall in the studio thinking it’s going to a gig…!

I've been using a Tackle bag for a couple of years now, and it has held up pretty well. Before that, I used a Promark bag for years and years until it finally fell apart, literally.

I've been using the Zildjian Super Drumstick Bag for years. I own 2 and they've held up for years. Plenty of room for sticks, brushes, etc. and they come with removeable straps if you want to hang it. 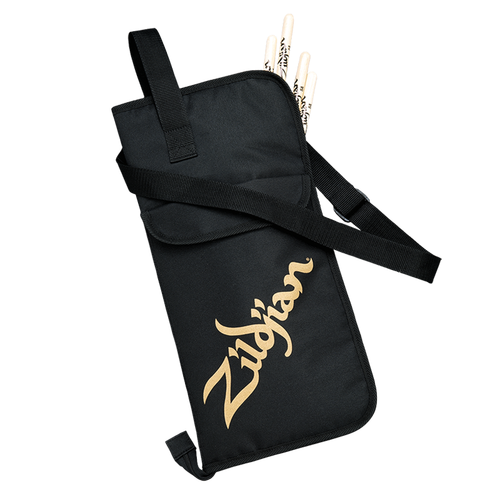 This is a bag from Glenn Cronkhite.
I believe he is the originator of reunion blues bags that he has since sold to current ownership. This bag was made after the sale of RB and right before his retirement.
My wife got me this as part of an anniversary gift some 11 years ago. It has aged very well so far. This will be a hand me down to my kids or grandkids one day.

For decades, I used a hard plastic clamshell plastic case that used to carry an old Casio keyboard (child's model). It was about 17" long on the inside and could hold maybe 8 pairs of sticks. You could throw that thing around the band trailer and it would beg for more. I finally retired it a couple years ago, but it still works and is not broken.
B

I have a sock zip tied to my hat stand 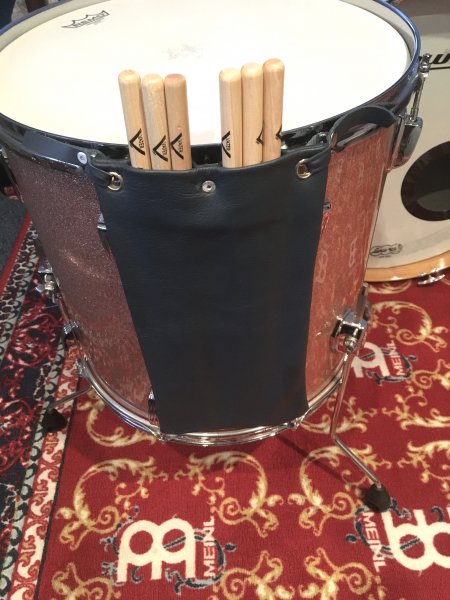