What size ride do you mostly play?

I keep waiting to hit 100 votes to see what comes out on top.

I own more 20s than anything but I think I am starting to prefer 22.
E

18”, I pack it in a 18” cymbal bag and that with hi hats fits inside my 18” bass drum bag. I have 2 trans stamps, a Paiste SCDR, Zildjian kerope flat prototype and a Zildjian uptown I haven’t tried yet.
Z

Edward said:
18”, I pack it in a 18” cymbal bag and that with hi hats fits inside my 18” bass drum bag. I have 2 trans stamps, a Paiste SCDR, Zildjian kerope flat prototype and a Zildjian uptown I haven’t tried yet.
Click to expand...

I seem to remember 18" and 19" were allowed as answers when the poll first started. Did they get removed or am I suffering brain fog?

The pattern so far looks like the graph of diameters based on my sales tracking. That's not surprising, although the last time I looked the lead of 20" over 22" in years of sales data was different from what we see here where 22" is slightly in the lead. At a guess, enough people who own a 22" also own a 20" so in longer term sales data 20" in the lead could make sense without invoking a change in preference for 22".

There are dips for the odd diameters (19", 21", 23") in the general sales distribution, although Paul Francis has mentioned that the 21" A Sweet had become their best seller a couple of years back. Sales aren't going to give exactly the same picture as an individuals current choice. Sales represent a longer term view as the cymbals can go back a few decades.

Looking forward to reaching 100. Ill try and show a graph of sales data based diameters, although I've been snowed under with cymbal research work recently so it may take some time.
Last edited: Oct 27, 2022

zenstat said:
I seem to remember 18" and 19" were allowed as answers when the poll first started. Did they get removed or am I suffering brain fog?
Click to expand...

I did remove them, no one had chosen them after about 75 responses. But there is still “something else” as an option.

And by the way @zenstat we are just a few responses away from 100. I would love to get a much larger sample size.

My main ride is a Zildjian K Constantinople 22" Medium Thin Low Pitch ride. I have the 19" crash/ride as alternate on the left. Versatile and dynamic! 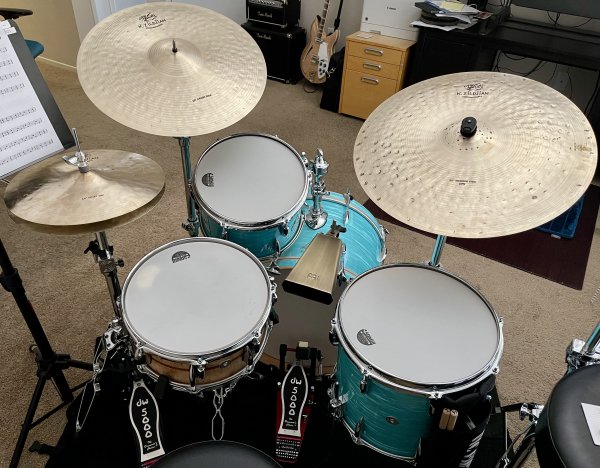 Today I use either a 21" Sabian Raw Bell HH ,or a pre-serial 20" Paiste 602 med. with a small assortment of others collecting dust .

I played a 20" main ride with an 18" supplement for decades, only to surprise myself by preferring a 22" main ride today. However, I still set up an 18" too, and sometimes a 20" as well depending on the genre. I do because I like different ride sounds for different songs. In fact, I often change ride cymbals within the same song, not haphazardly, but because I think different rides are sometimes better for different parts of a song.

Accordingly, I picked 22" as the diameter of my main ride mostly because my 22" is in the righthand ride position, is probably my most versatile, and is probably played the most. However, gosh, I wouldn't want to be limited to it. In fact, if I could only bring one ride to a gig, it might not be the 22".

Add that I'm not convinced that diameter is the most important factor in a cymbal's sound or playability. Insofar as it is, I've kind of theoretically formed the opinion that a 21" is probably ideal for a ride. But I don't even own a 21". Why not? Well, there are a ton of other variables, and it has just so happened that I've ended up with an 18", 20", and 22" today.

My three most-used rides are 22" ('60s A, SCDR, pre-serial 602), but over the last few months I have developed a renewed appreciation of my 20" rides. No particular reasons, more of a "hey - ya know, these are actually pretty good..."

I picked 24" as the Giant Beat gets a bunch of stand-time on stage, however a 22" DE MK II and 22" SCDR get used quite frequently in the studio.

Generally a 20” K, I currently have a 22” K Left Side with rivets (on the right, fwiw), and it and I are in a deep love affair where we discover new things to love about each other every day.