Who Did It Better? Ludwig Vs. Slingerland

Very nice writeup, thanks for posting

the Drumming public decided long ago, even when Slingerland was still alive; Ludwig did something better; and they still exist.
think Slingerland were rounded in sound and look; Ludwig a sharper square cut in looks and sound.
Slingerland's competition in the rounded look and sound unaware-ingly was possibly Gretsch.
Slingerland's aim was off.... all-around.
Couldn't compete with Ludwig; not in the same ballgame as Gretsch.
my4c

CC Cirillo said:
What a fantastic write up.

My eyes are being opened to the Land of Slinger.

This is the sort of deep content that a non-forum member will stumble across on the internet researching one or the other of these drums…and the next thing you know that person is a member.
Click to expand...

Thanks for that (and the other complementary replies).

When it dawned on me that I now had two very similar snares from the two companies this was initially just going to be a couple pictures comparing the look of the two. Once I started to try to write a description for the pictures I realized that it needed more "depth" than I originally intended, or it likely would just unleash a torrent of questions about how aspects of the drums compared to each other. So I tried to anticipate what people might ask about and have the answers there pre-emptively, which turned into quite a long post, further lengthened when the color of the Slingerland snare triggered an old memory.

Even so perhaps I didn't go deep enough as far as playing impressions...but I'm not really "that guy". If I can get a drum to sound the way I want it to and it makes that sound when I hit it with a stick then I'm pretty well satisfied. I'm not one for the colorful descriptive sound words which only have any real meaning if we all share the same definition....my "warm woody tone" (to quote Ned I. on every wood snare he's ever had for sale) may be very different from your idea of what that means...so I prefer not to go there. I'm not a great drummer by any means, but I've been around enough to know good sound from bad so hopefully if I say a drum sounds "good" to me that is enough for some people to cause them to investigate themselves.

And while this info may all be helpful to a vintage drum novice who stumbles onto it in a search somewhere down the road (assuming this website continues, I shudder to think of all the informative posts back in the old DCI forum and even some early posts here that were wiped out either by the site going under or being revamped) it may be of little impact on many of us who have defined our allegiances to a particular drum maker long ago. I've always predominantly been a Ludwig guy myself, although I have room for the other American major brands (and recently some British drums as well).

I never actually summed up that first post or declared a "winner", getting sidetracked by a memory. I think the Slingerland does slightly edge out the Ludwig as far as the quality of the build (maybe as #2 they tried harder), although Ludwig was probably at the top of their game, as far as 3 ply drums go, right around the time that Jazz Festival was built. Sonically they are very close so either could easily fill the bill if that is the sort of sound you want. A Slingerland Hollywood Ace is likely to cost you less than a Jazz Festival so there's that. The Jazz Festival having the Ringo connection helps buoy its prices, not to mention the general pricing disparity of vintage Ludwig vs. Slingerlands. The Ace is also competing against other Slingerland wood shell models such as the Radio King and the Artist. Solid shell Artists are exceptional but with the three ply version it's basically the same as the Hollywood ace other than the throw off and I'd probably prefer the Ace's simple Rapid to the Artist's sometimes problematic Zoomatic.

Well written and photographed. I enjoyed it very much and would be happy with either but if having to make a single choice it would be.....

My other Hollywood Ace 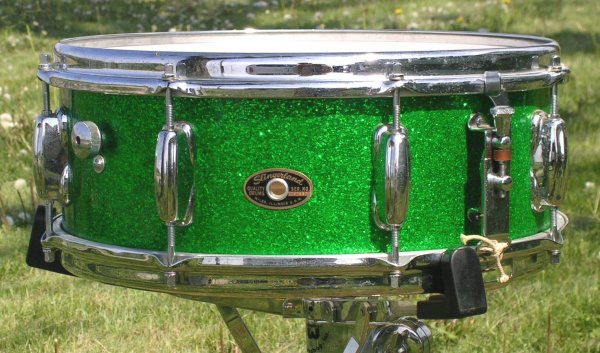 Finish wise I love the Ludwig a bit more. Other then that without hearing I can’t say anything and by then you would have to outfit with matching heads too and bottom and tune the same etc….. off appearance alone myself I like the Ludwig.

bassanddrum84 said:
Finish wise I love the Ludwig a bit more. Other then that without hearing I can’t say anything and by then you would have to outfit with matching heads too and bottom and tune the same etc….. off appearance alone myself I like the Ludwig.
Click to expand...

I agree that the Ludwig wrap is the better of the two.

In a perfect world I would have posted sound samples of each but you're right that I'd have to do a lot of prep to even the playing field, then get a good recording of each, and even then it would be rendered a more or less useless excercise since I have no control over what the person listening to the clip is using for playback.

Even with different heads, etc. they sound similar.

Its a Ranchero vs El Camino situation.

Regarding the Slingerland...
The muffler knob usually had a cut in the the threaded part so you couldn't unscrew it all the way. It's easy to break through, so usually if someone cleans the drum, they just take the knob off. I always did.
Slingerland's rapid is similar to the P83, but it tended to loosen a lot when the drum was played, so they added that gum rubber thing that is fixed to the threaded part and rubs against the back plate.
Very typical of Slingerland to "fix" things in restrospect. They made the mount brackets on the rapid strainer and butt plate too short. Instead of changing the design, they just sent the drum out with washers between the part and the shell.
They did a similar thing with a washer to fix the snare height on the clam shell throw off.
And they made their '60s torpedo bass drum T rods with too short a space between the torpedo and the washer, so they added a washer. Ever notice how '60s Slingerland T rod rods had 2 washers?!
On their stage band bass drums they realized that the normal tom / snare lug was too close to the shell when using a bass drum hoop, so they needed spacers. They used the unfinished backing plates from the metal shelled snare drums.

other than that they were a sterling company
(lol couldn't resist

CC Cirillo said:
What a fantastic write up.

My eyes are being opened to the Land of Slinger.

This is the sort of deep content that a non-forum member will stumble across on the internet researching one or the other of these drums…and the next thing you know that person is a member.
Click to expand...

JDA said:
the Drumming public decided long ago, even when Slingerland was still alive; Ludwig did something better; and they still exist.
think Slingerland were rounded in sound and look; Ludwig a sharper square cut in looks and sound.
Slingerland's competition in the rounded look and sound unaware-ingly was possibly Gretsch.
Slingerland's aim was off.... all-around.
Couldn't compete with Ludwig; not in the same ballgame as Gretsch.
my4c
Click to expand...

Slingerland made the better quality from my experience, not once have I seen a post here about heads not fitting like Gretsch , and Ludwig is famous for bad edges …..

Great write up. Thanks for that!

I’m a bit biased being a Slingerland guy but I think the Slingerland snares are the best of the lot for American drums of the time. The Supra and the Supersensitives (esp. the brass ones) are fantastic but you are comparing a third string Slingerland to the top of the line Ludwig. The Slingerland “crack” more (here we go!). But they are still warm and sensitive. When I think of the jazz fest I hear something more mellow.

I’m a big fan of the Stick Saver hoops. There’s something about the sound of a rimshot to my ear. I have 4 snares with them, 65 Artist, mid 70s COB and both my Tama SLP maple drums. I’ll have 5 when my Peter Erskine snare ships.


The reason I bought the Slingerland in the first place was to use with a gold sparkle Ludwig set. At the time I couldn't seem to find a matching Jazz Fest and this very similar Slingerland popped up for maybe 60% of the typical price for a Ludwig so I snagged it. Now I have the actual drum I wanted, but both are definitely "keepers". I wouldn't mind finding a gold sparkle Slingerland set someday....maybe. When I was in 8th grade I would go to the high school building after school for my drum set lessons from our school drum teacher (the H.S. band director was a drummer with a doctorate in Percussion and he taught all the drummers in our small school district regardless of the grade you were in). One time near the end of the school year I arrived to see a brand new gold sparkle double bass drum Slingerland set fresh from Frank's Drum shop set up in the band room. It belonged to one of the seniors who had just taken delivery of the big (13/14/16/18/24/24) set and was going to use it at the H.S. spring concert. Even though I was already in the Ludwig camp (having my own older gold sparkle club date set) I was blown away by that drum set and it left a lasting impression on me. I wonder whatever happened to it. The owner eventually married the prettiest girl in school (a senior when I was a freshman) and moved far away, presumably taking the drums with him.

Anyway, that's all beside the point I suppose. I just thought I might compare these two similar drums. I guess the bottom line is, in my opinion, that either of these workhorse drums will do the job. You might be able to find the Slingerland at a better price but both are top notch vintage snare drums.
Click to expand...

You're not the first one to use a Slingerland snare with a Ludwig set. Neil even finished his to match the lacquer on the Ludwig. 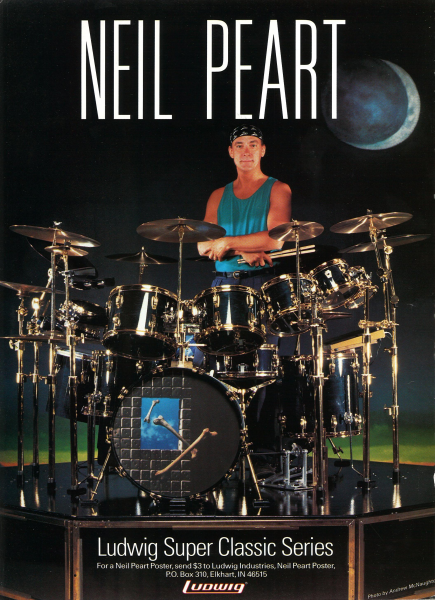 JohnnyVibesAZ said:
You're not the first one to use a Slingerland snare with a Ludwig set. Neil even finished his to match the lacquer on the Ludwig.

Was Neil's an Artist or a Hollywood Ace (or a Radio King)?

K.O. said:
Was Neil's an Artist or a Hollywood Ace (or a Radio King)?
Click to expand...

It was originally a Copper wrapped drum .
I’m going to guess it was a 3 ply .

I thought Neil’s Ludwig’s sounded phenomenal live , I never got to hear the Slingerlands ….His DWs , yukk !!!!