Who Is The Best Cymbal Player?

Back in about 1969 or 1970, when I was a kid starting out, there were some older guys in a rock band I admired. The drummer, a guy named Gene, actually didn't play a lot of "drums." He has a 1 up, 1 down set, and played them about like Ringo--never anything fancy. But Gene had what in those days was a ton of cymbals--realistically only 4-5 in addition to his hats--but way more than any drummer I'd ever seen. And he played them all, plus I noticed, did some hi-hat work with his foot I'd never seen before. I was enamored with his style, and to this day probably emulate it as best as I can.

Sorry, no videos, and I doubt that Gene ever became a famous drummer. But he sure did inspire me. That guy was more of a cymbaler than a drummer, and it worked.

For me, that answer is easy.... Dan Gottlieb! Keep in mind that I did not grow up in a jazz environment, so until I heard the first Pat Metheny Group record (the white cover) released in 1978 at 16 years old, cymbals were just a punctuation at the end of a sentence. He opened an entirely new world of colors and textures to me me that I never knew existed! Ive never been the same.... I can easily play with less drums but I prefer more cymbals! 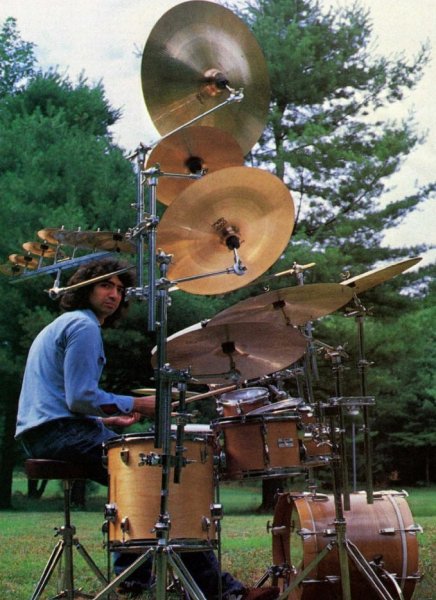 Bonham is at the top of this list too. In the early days, he'd hit a crash (for the 1) catch it for the (and), and finish the triplets with his foot only. I've never seen anyone play a trip like that.
Sugarfoot, was a cymbal catching machine. Insane stuff

I would have chugged it

For me, the best is Neil Peart. He placed is cymbal hits precisely, musically and so originally.

I’m not even a huge Rush or Peart fan but when I do hear their stuff I am in awe of his cymbal work. Strategic hi hat chirps, off hand crescendos and catches, slipping crashes and splashed as notes in long rolls.

The guys cymbal work was amazing.

Jimmy Cobb. The sizzle he gets from his rivited ride cymbal on So What is magical.

As far as rock guys its mostly a " Wash"
S

I was going to say Danny Gottlieb, but he's been mentioned.
Maybe go back to his teacher Joe Morello... or even earlier:
Papa Jo Jones (the hats and one of the first to ride a top cymbals)
Dave Tough (15" crash and china)
Kenny Clarke, who esatablished the ride as the dominant sound in jatt drumming.

On the other end, Dave Weckl always had beatiful cymbals sounds, too.

Since cymbals have been an integral part of the drumset from the get-go, every great drumset player has also been a great cymbal player, to a degree.

I have to change my vote for Sugarfoot, to Stewart Copeland, and honorable mention to Carter Beauford.
Stewart's work on the hats alone is best compared to.....well, this is a family forum.

The question should be; how does one attain their unique sound, pulse and feel so that they play THEIR cymbal beat the best there is.