Who was responsible for more drum sales. Krupa, Rich, or Ringo?

Whitten said:
Don't really know why you are doggedly sticking to this line.
Click to expand...

Because no one else took this side.
It would be a boring thread if we all said Ringo with nothing else to offer.
I came up with some somewhat strong points that offered resistance to the obvious answer and allowed for members to dig a bit deeper.
It made for a more interesting thread.
And in case you weren’t paying attention … I too am in the Ringo camp.
But I had a blast working the platform and we learned some cool tidbits.
That‘s why this thread exists.
And other than one or two members that had to bang erasers at the end of class, we all behaved and enjoyed ourselves remembering a bit better some of the more impactful times in our drumming lives.
And that is a pretty cool thing.
T

notINtheband said:
Not to mention the exponential sales from all those future influencers that came from that initial Ed Sullivan appearance. Like a family tree. My inspirations all trace back to Ringo through a generation between myself and the Beatles.
Click to expand...

That’s who got me playing 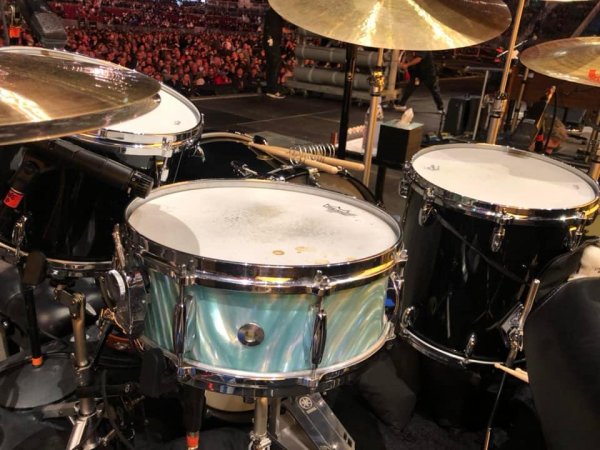 I'm an old dude and haven't followed the drum scene for decades. I will only reference the times I did. For me I think it was Gene Krupa on those Slingerlands. Then Louie Bellson on those Rogers. He and his band played a concert at my brother's high school and he was banging away on a Slingerland kit over half a century ago.

This discussion was steered toward drum brands at some point and not the OP’s question. Would have Premier or other brands gotten big like Ludwig if Ringo played them!?
Someone mentioned it was the Beatles, not Ringo, and I agree with that. But why did Ringo play Ludwig? because as he said “I wanted an American drums, like everybody else” why? Because of the jazz guys before Ringo and Watts, they were inspired by them BUT the drum buying boom was because of The Beatles, that bass drum that said THE BEATLES and then the little “Ludwig” above it and probably all the commercials at the time “Beatles Drummer Ringo Plays Ludwig”, everyone wanted to be a drummer and wanted to have a Ludwig set. Same with Morello before that “Joe Morello plays Ludwig”, and who got influenced by that!??? Ginger Baker, and who got influenced by Ginger Baker!? Nick Mason, he literally switched to a silver sparkle Ludwig kit, just like a fan would do. Whoever watched these guys and their cool bands (Beatles, Pink Floyd, Cream, etc.) naturally gravitated towards Ludwig, it got big. It was Beatles and that white bass drum with 2 logos, “The Beatles” and “Ludwig”. Even my off-roader cousin who doesn’t know anything about musical instruments, one time saw a Ludwig logo somewhere in my room and told me ohhh that’s the same logo on the Beatles drum, right!?? That bass drum head is so iconic and it had its effect.
Ringo’s or perhaps I should say Beatles’ effect was so strong. didn’t several well known and influential drummers play silver sparkle Ludwigs? Yet, black oyster is still soooo iconic, it’s not the drummer, it’s the band in my opinion.

Teaching cultural history at my school I can just say Ringo. The Beatles phenomenon was a once in a lifetime event, all the stars aligned at that time. Youth culture, media etc.

Another thing I've noticed is that when I played bar bands in the 80's, people over 40/50 that had a friend who was a hobby drummer (or wanted to be) nicknamed him Krupa.
People under 40 nicknamed him Ringo.

Buddy and Gene made the listeners amazed by drums.... But, both were a bit intimidating as far as trying to see yourself doing the same thing.

Ringo's refereshing simplicity made a lot of would be drummers feel comfortable that they too can play drums.

I wanted to play drums every since I saw a band playing live in the park when I was 7, 4 years after Ed Sullivan and The Beatles. Although I didn't watch the broadcast they were on the radio, I knew the music but didn't 'know' who they were. But everywhere I looked it was only dudes playing them. Then in the '70's Karen Carpenter was playing them, that's when I knew I could too.

Ringo was perfectly skilled to do what he did with the Beatles. That swing is his own. And no contest when it comes to drum sales.
S

GeneZ said:
Buddy and Gene made the listeners amazed by drums.... But, both were a bit intimidating as far as trying to see yourself doing the same thing.

Ringo's refereshing simplicity made a lot of would be drummers feel comfortable that they too can play drums.
Click to expand...

Exactly this. Ringo, like the genera of Rock music itself, brought accessible drumming to the people. His kit was simple, his playing quirky but also quite pedestrian and accessible. You and 3 friends could play passible Beatles covers on all the rock instruments (drums/guitar/bass) after a few months of practicing with 0 music experience if you were serious about it. This is not true of Jazz or Big Band. Krupa and Rich are inaccessible and intimidating to someone who has never put stick to head before. What are they even doing with the stick like that in their left hand? When they see Ringo keeping a basic rock beat with occasional simple fills, having a blast too, they not only think "I can do that", they think "I want to do that".

A better question would be who nudged more sales toward their brand by people who were already decent drummers. Did Ringo cause a shift in the buying habits of existing pro and semi-pro musicians? I don't know what things are like now, but I've heard pro drummers in modern times complain about getting the wrong stuff from their brands, or getting nothing and having to get off the shelf stuff at the last minute before a tour. A reputation for being an attentive and reliable brand to your players could do it now but I don't know about the 60s really.
J