Would you get your first kit back?

Didn't use it long, but I actually still have the very first bass and snare I was provided by my Dad. His 1940's set of Ludwigs. The 2 toms are long gone for whatever reason. Bass still has the calf head on it. I had the snare redone by Precision to make it usable.

That said my actual first kit I had to use for myself in 1976 was a blue sparkle Royce set. It was total garbage and if I saw it today I would set it on fire.

The only things worse than the drums were the cymbals I had (not sure what they were) and the lousy flat based stands that barely stood up. To keep one of them from falling over, I had brought in large rocks from outside to set on the legs. Sometimes it worked, sometimes it didn't.

I still have my first kit. 1966 Ludwig Club Date in Sky Blue Pearl. It was my great uncle's -- I used to play it as a baby when we'd visit his house. I still use it for studio work - it's great for singer-songwriter / folk / traditional country stuff. 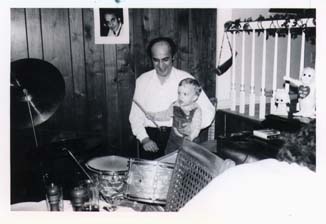 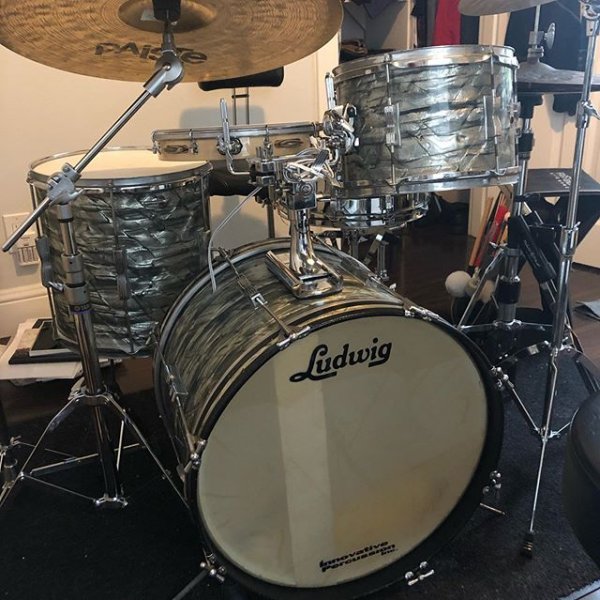 No, it was a Pearl international kit. Sounded bad.

Put me down in the heck no camp. And I have Catalina's now

1966 Ludwig Downbeat with matching Jazz Festival in black diamond pearl, purchased by my parents in 1968. They looked awesome but never sounded great. I did know about matching each lug and getting the batter and reso equal, even as a beginner. The snare sounded horribly boxy, I may have tried to match the batter and snare side on that as well, or I may have been afraid of cranking the snare side. I sold them in 1975. Would like to get them back to see what I was doing wrong. After all, I was just a beginner at that time. I am a SBP-man now but I still have a soft spot for BDP.

the_dude said:
I'd love to for sentimental reasons.
Click to expand...

Mine was a Majestic Semi-Pro. To me it was the coolest thing I’d ever seen at the time. 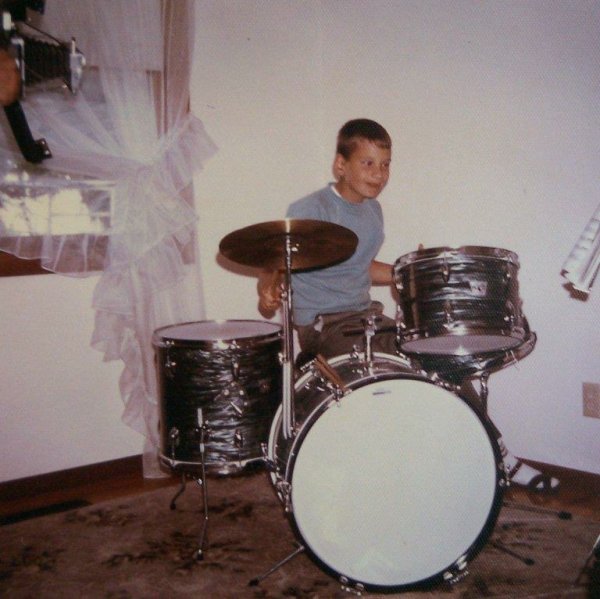 Jazzhead said:
if you had the opportunity to find and get your very first drum set back, would you?

let’s assume you can still identify it, it is in good working condition and it is playable.
Click to expand...

I almost did, just recently.
Unfortunately, I haven't worked in some time and in the end, I needed the cash for other things, so I had to pass.
On top of that, I realized that what I really wanted, was that kit, as it was way back when I owned it.
Almost 40 years later, it just wasn't going to be the same.
Since that opportunity passed, I've decided to move on and simply remember that first kit as it was, while enjoying my current crop of percussive paraphernalia.

No. My first kit was a 50s Slingerland white mop. I traded it in to get my Rogers, but kept the Zildjian 18 and 22 cymbals and the cymbal stand. I also kept the snare stand. I needed the better kit because I turned 21 and could finally get to play in dark, smokey, smelly bar rooms.

My first kit, pictured here, was a 1967 4pc, gold sparkle, MIJ Lyra. By the time I traded it in for my Rogers Celebrity, in 1972, I had already re-wrapped them in Gold Satin Flame. Would I want them back? Only if they were in the original gold sparkle! I got my start with my Lyra kit and will always have wonderful memories of them!

Blue sparkle 5pc. MIJ kit (probably made by Star) bought through the Sears Catalog for my birthday/Christmas in 1972. I'd get it back in heartbeat. In fact, I've been looking in the usual places if anyone has, or knows of one... I added the second floor tom a year later (Christmas '73). Photo was taken spring of '74. 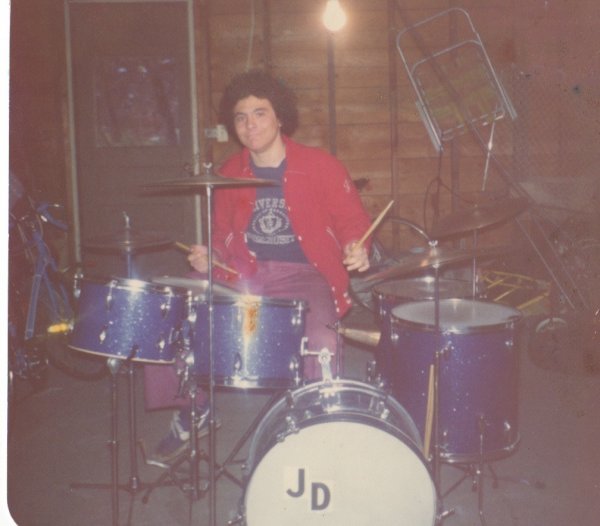 If I ran across those exact Pacific Blue Rogers drums in 12, 13, 16, 20 that my parents bought me used in the late 70's, I'd be VERY (!!!) tempted. But I doubt that would happen, they've been gone a long time. I never really see Pacific Blue Rogers drums for sale, I guess it wasn't a real popular color. But I must admit, every once in a while I do an eBay search for "Blue Rogers Drums." I just don't know where I would put them.

Cool first kits, thanks for sharing, and it is interesting to see how some people care about the sentimental value of their first kit and some remember the quality of the drums they had and the one they have currently and just pass on it. To me, if my first kit was playable, I’d get it back in a heartbeat and try to make space for it. My early 70’s Pearl wasn’t all that clean and the shells were probably Luan but man I still love that kit.

I still have it! 1965 WMP Classic, added/switched some hardware, original A. Zildjian cymbals, added some also. I worked long & hard for that one.

No, though I guess if it was cheap might be cool to have. It was a 5 piece CB700 with standard sizes 12,13,16,22 and snare. All drums used Remo PTS heads, these were pre tuned and pre mounted to a rim and then used clips to hold the hoops on the drum, similar to vintage rim clips.

The original CB700/Remo PTS heads were terrible and pulled out of the rims after about 6 months. By then I had mowed some more yards and was able to purchase new batter heads made by Remo, but still PTS. Unfortunately the built the drums to save money and used 5 lugs on the 12, 13 and 6 lugs on the 16. I was able to find of course a 12" 5 lug rim but nothing for the 13 and 16 (This was in 1985) so I was stuck with the PTS heads and by then had broke top and bottom heads from the original kit so played the kit as single headed until I got my next kit a Ludwig Rocker in 1987.

Edit: found a pic, this was in 1987, my dad took a pic as we were about to load them up and go to San Antonio to get me a better set 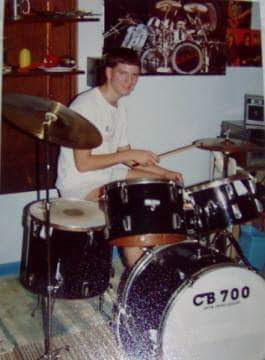 I still have it in my garage. Red sparkle Pearl kit my parents got me when I was nine. That was in 1971. Plus a floor tom that I made from a blank shell in craft class when I was in junior high. Got a red sparkle wrap and hardware then put it together as one of my class projects.
You must log in or register to reply here.