No sir I do not....it's in storage. The rid is collapsible and has a Yamaha sticker in it. Just seems like so much overkill to me.
T

I have a small bop kit of these 18/12/14 but they are a black lacquer, not a wrap. I have a question for you guys who have these kits, Does your bass drum have a shell reinforcing rod like the Rogers Big R kits do? Mine does and I can't seem to figure out why you'd need that in an 18" bass drum.... it's very solidly built and the 12 weighs nothing... any thoughts?
Click to expand...

Interesting. Mine does not have a reinforcing rod. Got a pic of yours?
Click to expand...

If the rod connects to the bottom of the tom holder and sits on the bottom of the shell (it is probably adjustable for shell size), that support rod was an option. Most of the time these were found on 22" or especially 24" bass drums, usually in conjunction with the big square dimensioned toms (how anyone played these is a mystery - seems you would have to be 7' tall to reach them). The idea was to provide additional structural support for those big toms, though i don't recall anyone ever relating about or having problems with heavy toms damaging the bass at the mount.
T

What color are they? I had a set on the same sizes that sounded amazing but weren't kept up too well and i eventually returned them. They sounded great with coated Ambs but even better( in my opinion) with Ebony Emperors.

DWSlingerland45 said:
I have a small bop kit of these 18/12/14 but they are a black lacquer, not a wrap. I have a question for you guys who have these kits, Does your bass drum have a shell reinforcing rod like the Rogers Big R kits do? Mine does and I can't seem to figure out why you'd need that in an 18" bass drum.... it's very solidly built and the 12 weighs nothing... any thoughts?
Click to expand...

I've never had or played RCs but these drums are fantastic. I know some prefer 8000s to RC even. I'm still getting to know them and went with pinstripes on the toms as per what I gather RCs often like and they work great on these as well. Actually like the pinstripes on these better than the Ambassador X's I tried initially (although they were somewhat used...). Diggin' my new drums! I haven't had a new set of drums in several years.... Anyway, enjoy,

Heres my 8000, yes the pinstripes work very well on all the batter heads including the bd.
Review of the 8000 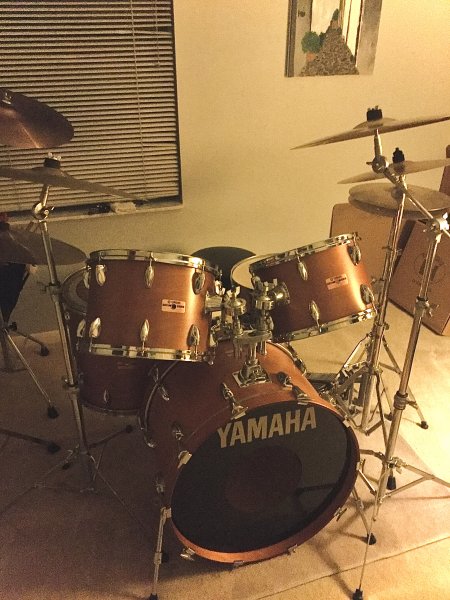 felis said:
Do you know if the shell composition the same on all three - 8000, Tour Custom, and Rock Tour Custom?
Click to expand...

My understanding is, the shells are the same. The change came with the RTC's - single piece lugs and a phenolic (sort of like fiberglass) outer layer.

Marquisjohnson22 said:
One of my all-time favorite sets! I miss the sets i had and will probably add another set in the future. These are some amazing sounding drums!
Click to expand...

Five years later and I still want another Yamaha 8000 set. I have an amazing 7000 Series kit so I’m still digging that Yamaha old school vibe. Even this 7000 Series kit I currently have can hand and/or surpass just about any kit. Yamaha makes some great drums.
D

Co-incidentally to this thread being revived, on Friday, I bought a 12”/15”/20” in cobalt blue.
Badges date to 1987.
The 12” and 15” have RIMS attached. They have a few dings outside but edges & insides are like new so I could not resist.
I already have a 16” that I use as a bass drum so I was aware of what great drums these are for low money. And I really like the colour. 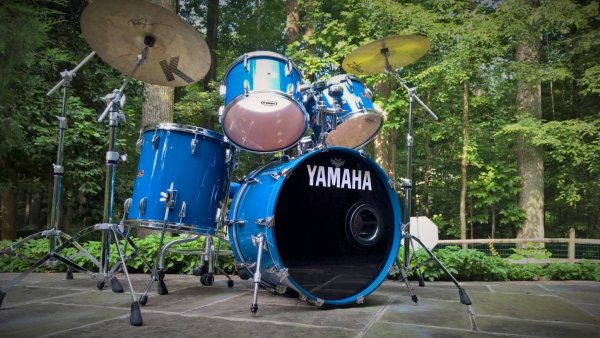 Loved mine - flipped them about a year ago. I had a Tour Custom in Cobalt Blue (The Anton Fig color). Anton played the Tour Custom on the Letterman show for years. Incredible bang for the buck and you can often find these for well under $1K. They are birch-mahogany composite shells and really give a terrific warm/fat tone that sounds better to my ears than the RC. I think the bass drum actually sounds better than any RC bass drum I ever played. I had them topped off with Ambassador-X, but I can imagine they would have sounded terrific with pinstripes.

Pardon my ignorance here, my friend has these in his studio, are these 8000s as well? (has the matching BD too, it just isn't in this pic).
I've never played them but have heard some recordings he has made and they sounded really good. 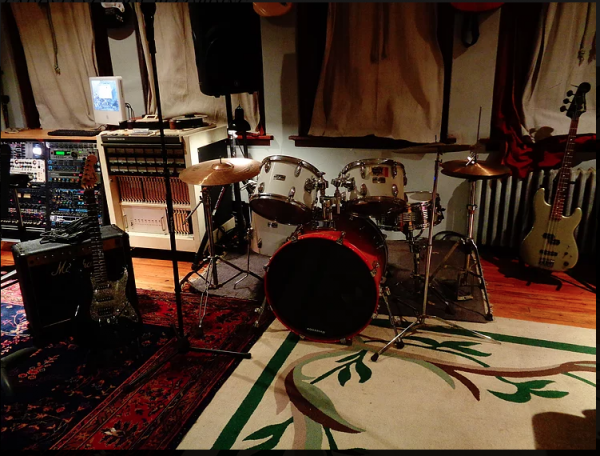 I never liked the (wood shell) tour or tour custom snares, (RC's are MUCH better) but the bass drums and toms are FANTASTIC!!!! I also have a "beater" kit of Black Tour Customs in 18, 10, 12, 14 with wood hoops that sound amazing. 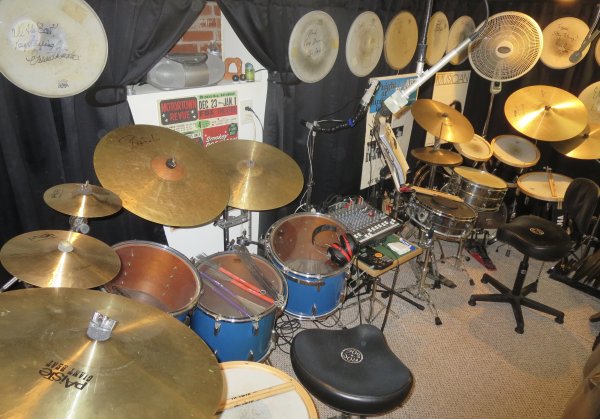 When I originally bought them I compared the Tour Customs and the Recording Customs side by side in many tunings. I liked (and still do) like the Tours MUCH more!!! I think it's a crime that Yamaha has made the Tour connotation so confusing, having called three very different lines of drums "Tour's" (throughout the years.) Hagi never would have done that.

KevinD said:
Pardon my ignorance here, my friend has these in his studio, are these 8000s as well? (has the matching BD too, it just isn't in this pic).
I've never played them but have heard some recordings he has made and they sounded really good.

I can't tell from that pic.
I went down a rabbit hole reading threads about 80's Yamaha drums and their model/serial numbers.

I've owned a Yamaha few kits; Oak Customs, old and new Stage Customs, played Maple Customs, they were all good or great.
I paid about $525 US for the three 8000 series drums which I thought was reasonable.
Hoping to be able to gig with them someday!
I attached a screen shot of Yamaha serial numbers and dates.

I recently acquired a 1978 Yamaha D900 series Drum Set. It was from a one owner who purchased it new in 1978. This thing is like new condition from a music store. It is the "Real Wood" finish. The previous owner had these all cased up in hard shell cases in his living room for the last 25...
www.drummerworld.com

This still confuses the hell outta me! Is there any thread/site that spells out the progression of all of the Yamaha 8000/Tour lines?

Been searching and coming up empty so far.

what are identifiers for the more desirable 8000/Tour Customs? Rectangle badge?

KevinD's white kit do appear to be 1980's Tours in a white wrap. Lugs are small and rounded like a tail light. It's the only time Yamaha used them. Best I can say from that fuzzy photo.

I went down the rabbit hole 2-3 years ago and made a thread on 9000's which are sort of sister drums to the 800/8000 Tours and Tour Customs.
In that thread I think the 8000's are mentioned along the way. The Yamaha dating guide has been since updated and that's linked towards the end of the thread. But the new site is currently on "vacation." You can
verify Tours and Tour Customs just by the rectangular badges and the TT-8XX model numbers. A following "T" does indeed mean "turbo" sized Tour Custom. The TC 16's and 18's were always standard so even
on Turbo kits those will be FT-816 C and FT-818 C. Maybe the "C" stands for "custom in standard size". To Yamaha, a 'custom' designation means lacquer finish. The badge colors on the Tours/TC's is a pinkish or rose tint. Power Tours are in "force" sizes which are commonly seen on the 80's RC's and TC's. Force sized toms are 2" deeper than standard and have an "F" on the badge....ie TT-812 F.....the Turbo would be TT-812 T. TT-812 C would be standard.

If people need a specific catalog, send me a pm and I’ll look it up in my Yamaha Drums library which has both global and japanese scans of catalogs, going back as far as 1967.

This always helps with dating drums too, together with the serial dater from the Yamaha website.

Its interesting btw that the GA desginated drums not only feautured the more road proof wrapped serie but the natural, un-laquered Real Wood finish too, which is extra prone to dents and scratches.
You must log in or register to reply here.