What is the period correct snare drums preferably matching real wood or metal that came with the 9000da series. Also was there a TT-910DA Tom that would compliment my setup? Thanks!

Johnnydova said:
What is the period correct snare drums preferably matching real wood or metal that came with the 9000da series. Also was there a TT-910DA Tom that would compliment my setup? Thanks!
Click to expand...

Johnnydova said:
What is the period correct snare drums preferably matching real wood or metal that came with the 9000da series. Also was there a TT-910DA Tom that would compliment my setup? Thanks!
Click to expand...

If you look in the 1978-80 catalog I linked earlier, you can see all the snare drum options. The real wood 000 snares tend to be fairly expensive ($300-$500). The metal 000 snares are much more affordable. I've bought them for as little as $150 delivered. But you can snag one of those 055/065 metal for $150-$200. Those are the super sensitive versions and in some cases those intricate mechanisms can be trouble if any of the parts are worn. The 000 and 700 series metal drums are rather loud too. You might be better with a more mellow wood version for your jazz style kit. I have the 755D (dark real wood 5.5") and I like it a lot with my 9000D kit. And you can find a 750/755/765 D wood snare fairly reasonable from time to time. They aren't as well recognized as the 000 series. Reverb probably has a decent selection of all these Yamaha drums.

A TT-910DA drum won't be that easy to find. But I suspect they are out there. Be vigilent. Might be easier to initially "settle" for a 910D drum.

Yamaha recently took down their drum vault ID for decoding dates of manufacture and shell types. No big deal as it had a number of inaccuracies any ways. This new site linked below is more accurate and definitive. And yes, it works from 1975 into the 1990's and beyond. Both 2 and 3 letter dating. If your drums have the YESS mounts, you're already in 1992/93 or later. Yamaha badges prior to around May 1978 should have the silvery color, pointy top badge style. The rounded corner silver badges ran into late 81/early 82 when the rose colored badges appeared.

There is Facebook group on 9000 Recording Custom drums. They discuss the 70's and early 80's 9000 series drums from time to time as well. Though the site is heavily slanted towards the RC's. Some very knowledgeable people there on shell types, hardware, badging, transitions to and from Taiwan to Japan, etc.

Dec 1976 ("MZ") pointy badge on a TT-912A recording series tom. The "A" series would denote all brich shell with the long, single tension lugs. Early recording series. Those long lugs never really disappeared in the 1978-1980 period, though they seem to have become less frequent in appearance as the split lug design of the 9000D/DA's were being made. And then long lugs coming back in force in 1981/1982 as the RS/RC series started getting wide attention. 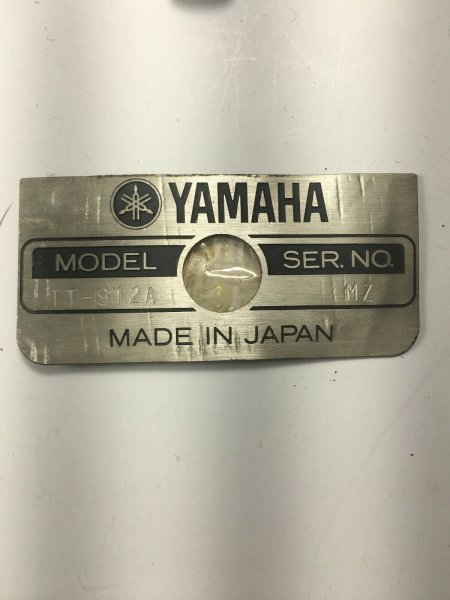 Shown are the plies bearing edge. It looks to be a mixture of mahogany, birch and maybe a layer of peanut butter. Definitely DA shells. 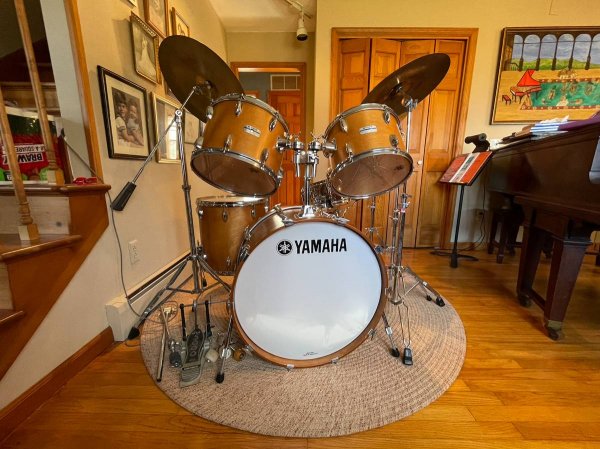 Thank you for that updated Yamaha link. It has confirmed that my Standards are from July '77.

Tama CW said:
Picked up a 1980 Yamaha 9000D real wood kit earlier this month. All birch shells. Made In Taiwan ROC badges. Standard depths on sizes of 13,14,16,24, and SD-055. Pretty clean overall. Great chrome.
Haven't gotten around to cleaning it all up yet. But the sellers kept it pretty clean.

I love the looks of that kit. I’ve always been a fan of the natural wood on those kits.
M

I just acquired this new (to me) kit....Opinions? I tried to upload photos....did not work. My shells show an inner and outer Ply of birch and one inner ply of Mohoganny...by the model numbers it's a 1981 Touring series ...FT-81-4GE
M

mobuscon said:
I just acquired this new (to me) kit....Opinions? I tried to upload photos....did not work. My shells show an inner and outer Ply of birch and one inner ply of Mohoganny...by the model numbers it's a 1981 Touring series ...FT-81-4GE
Click to expand...

These are re-wrapped....in a very nice "quartz white"? I'm wondering if they' are a beautiful wood grain underneath...

There's more than 3 plies in any 1980's Yamaha drum. Sometimes it's hard to discern between the layers. Sounds like you have an FT-814 GE. That's pretty rare in that size. If it was re-wrapped that's too bad.
Would cut the value considerably. I know some people that have removed a chrome finish from the all birch 9000D shells and had a beautiful finish underneath. Not so sure what you'll get with the Tours.

I am looking for YD9000 series of drums made in Tiawan. Do you still have this kit?
Q

Hi from Melbourne, Australia. I've been looking at various web articles on the 9000 series for a few years trying to discover a bit more about my own kit that I bought new in Oz in what must have been 1979. I say 1979 because I couldn't actually remember when I bought them but the excellent info on dating tells me all my drums (13, 14 racks, 18 floor, 24 kick) were made in July 1979, snare (6.5 inch chrome) in August 1979, badged Made in Taiwan, long lugs. For example, my 14 tom serial # is TT914E PN 5008. All the drums have the same model serial designation (9TT13E etc) and prod #s are all in the low 5000 region, like the example quoted. Snare has the std ser# for a 6.5 inch chrome. It's all birch natural satin finish and I believe the E indicates long lugs (D = single lugs), but that could be misinformation.

I gigged a lot with this kit from when I bought it until I stored it in around 2005 in preference for my late 60's Yamaha Red Thunder kit (smaller, quieter). The class of the 9000 series is indisputable but I'm wondering why I've never read about the failure of the threaded brass inserts for the wingnuts in the stands, 4 or 5 of which in mine have inevitably pulled out (snare, hi-hat and both cymbal stands). I'm a professional motorcycle and bicycle mechanic, so I am not ham fisted and looking at the way the lugs have been designed it's clearly a flaw. All the threads on the hardware that don't have this brass insert system are still perfect (eg pinch bolts for the legs on all the stands). I've looked closely at ways to repair them and rectify the problem permanently, but it would require fitting a threaded insert that is retained from inside, and there simply isn't space for this.

Having said that, did Yamaha rectify this issue on subsequent RCs or similar, and does anyone know if it's possible to upgrade the entire lug to a newer and improved version? I don't even know how the lugs are fitted to the chrome tubes, but I assume they're a press fit.

The only other flaw I recognised fairly early on is the fragility of the RH base of the kick drum pedal where it clamps to the kick drum hoop - it's thin die cast alloy; I broke one, replaced it and that promptly broke in exactly the same place. A friend gave me another, complete pedal which had broken already in exactly the same place. You have to recognise that my kit never sat assembled in a studio or loungeroom for years on end - it was my professional workhorse. Every other part of the kit has been faultless.

My kit is still in beautiful condition for something that's been used gigging for so many years and once I've given it a bit of TLC with a cloth and some polish I'll post some pics. I'm now close to a decision to sell it, but only if I can realise an acceptable price for it - we're in need of storage space and I'm simply not using it any more, but I'd rather keep it so my kids can sell it in another 45 years than let it go for a song. I haven't tested the market in Australia, but I'm positive these kits don't come up for sale very often - which is why I have no idea what it's worth. I'm going to send pics to a vintage drum dealer and see what they say ... no doubt their offer would have to allow them to make a profit when and if they on-sell it.

Quentino, a lot of detail in that post. And some questions I can't fully answer. The 9000 E series are basically the recording series drums with the long high tension lugs. Best drums Yamaha made in that 1976-1981 era before the Recording Customs
showed up. The only series I've seen with double lugs are the 9000 D and 9000 DA. Everything else in the alphabet seems to be recording series....A, B, C, E, F, G....they used a lot of letters. And I don't know why. The E's are seen quite a bit though.
Depending on condition your shell pack of 5 drums is probably in the range of $1500-$2000 ($US)....depending on condition. Vintage drum dealers will typically offer 50-75% of a kit's value depending on whether they buy it outright or take on consignment.
50% is a pretty standard rate for those who buy and resell kits.

Your chrome snare is probably the SD-0065 or 0055 version - the pro level super-sensitive at that time. The Taiwan numbering system reset to 5000 at the start of each month. Each drum size/model would start at 5000. A typical month might only produce 30-150 drums.....35-75 was pretty normal. So as a rule, the serial numbers all look low. Why they chose 5000 as the starting point? I don't know. I believe the shells were the thinner style from 1976 to 1983 or so. More rounded bearing edges too. By around 1984 the sharper 45 deg edges were in play. I've had a couple of the cymbal stand compression fitting screwed in inserts come out from time to time. You could reseal them with locktite, cement, or some other sealer.

Your hardware with this kit is probably the monster recording series stands with round rubber feet and gold Yamaha decals. Heavy and very worthy stands. Probably not easy to come by in your neck of the woods.
Last edited: Aug 16, 2021
Q

Many thanks TCW. I've finally got a clear understanding of where my kit sits among the whole pre-post-RC chronology. Yes, the stands are the heavy ones with gold labels (which are barely visible any more - a traps case isn't very kind to such things). I'll try the Loctite trick and see how the inserts come up. The cymbal stands are so heavy I don't use them when gigging any longer, as they're overkill for the style of music I'm playing these days. The kick pedal, snare and hi-hat I still used with my Yamaha red thunder.

I'll see what the dealer offers me once I finish the cleaning job - the 13, 14 and 18 have come up like new. Just the kick and stands to tidy up. I'm assuming your value estimate is in US$, which translates well into AU$. If I'm offered an indecently low price I'll see how I go with a private sale. If that goes nowhere, then I will have to store them again and my kids can deal with them when I'm gone!
You must log in or register to reply here.
Share:
Facebook Twitter Reddit Pinterest Tumblr WhatsApp Email Share Link