I have owned a lot of hardware bags and my favourite is the Beato Pro 1 bag . It has skateboard wheels which making rolling it in easier than those cheap wheels they put on most hardware bags . It has an extender strap handle which makes the load in easier and less stressful on my back . The case is water resistant and zippers are very heavy duty . I have the small hardware bag 25” long model .

I also like the bag that the Tama Classic stands Hardware pack comes in . Very compact and built well and really takes up little space .

I use the SKB Mid Sized Hardware Case. It has never failed me and SKB has a great warranty if anything should happen to it. https://www.sweetwater.com/store/de...-hardware-case-with-wheels-33-inch-by-15-inch

Does anyone have a Humes & Berg Galaxy tilt-n-pull? The 45" bag for under $120 seems like a great bang for the buck.

I have a modern soft hardware case—Humes & Berg Drum Seeker tilt n pull—but my favorites, a little off the mark, are these two.

Cymbal case I’ve had since I was 17. Don’t use now for gigging but it does have memories: 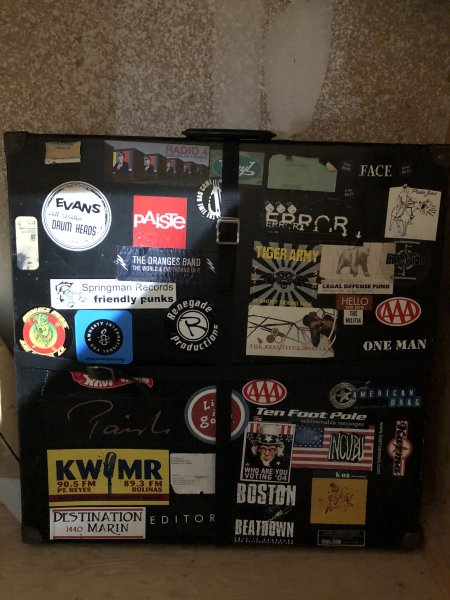 And the winner is, for me— My mom’s old suitcase I use to haul my Supraphonic. It carries a drum and extra head and spare parts just fine. Works well to hold an open stick bag. Added plus is it lets me think of my mom: 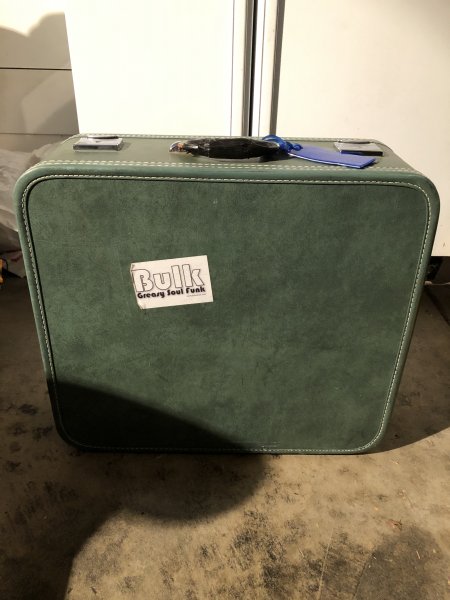 Redbeard77 said:
Does anyone have a Humes & Berg Galaxy tilt-n-pull? The 45" bag for under $120 seems like a great bang for the buck.

I have that bag and love it. Sturdy, well
designed and affordable. I do recommend it.

man you shouldn't give that opinion away free..

I swear by the Gator Protechtor Series Rolling Drum Cart - they're perfect for me (I have 2). Tall and roomy enough to allow for fully extended cymbal/hi-hat stands, easy to roll, and it stays upright when packing and unpacking. No more bending over repeatedly. I could see where it's not ideal for those transporting in smaller vehicles, but if you have a rear hatch door, it's perfect.

I have a small Gator/Protechor hard case on wheels 14x7x30 I believe. I also use a Tama hardware bag for smaller gigs it's 28x7x7 I believe and will fit my HH, Snare stand, floor tom legs, bass drum cymbal arm and barely but I can cram in a cymbal stand as well. I find smaller the better whether its a case or bag. I'm usually crammed in a corner and while a longer bag or case would keep from having to collapse stands I don't have the room on stage

edit: here's the Tama bag, I'll probably get another one, having two bags to split out everything instead of one big one. $40 and has been used on probably 30 gigs so far and looks fine. 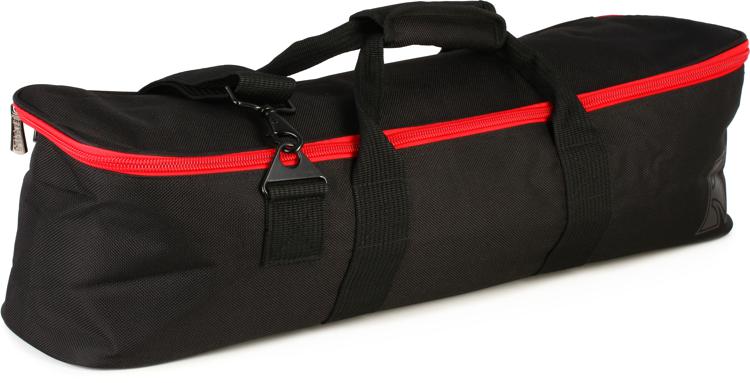 Ahead/Ogio. I have the medium one. 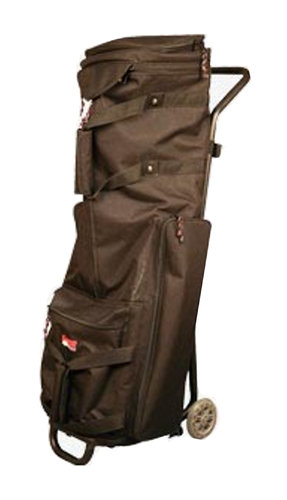 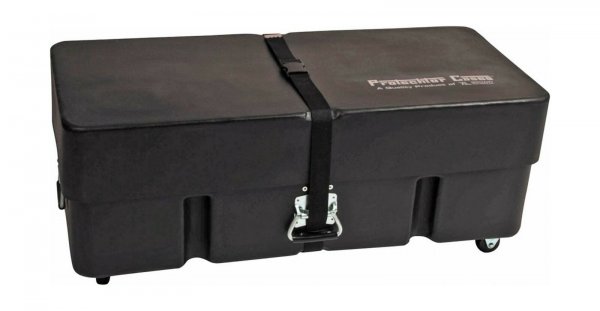 I have two of these Protechtor XL cases, this large split-level 36x16x12 version and a smaller version that's around 30".
The above model has a separate top layer for any size throne top, stickbag, mics, cables, pedal, ect. and a lower layer for stands.
They're heavy boxes but heavy duty - mine have been in service since '98 with zero issues and they're great for placing monitors or amps on, too.
I can see it lasting for the remainder of my playing years, easily.

Radio King said:
I could see where it's not ideal for those transporting in smaller vehicles, but if you have a rear hatch door, it's perfect.
Click to expand...

The only reason I don't own a sedan is because I play drums! Every car I've owned has been a hatchback, with the exception of a pickup truck I had and my mom's hand-me-down Ford Taurus sedan — which convinced me that I NEED a hatchback if I'm going to be a drummer.

I buy a new car every 4 years or so, and every time I go to the dealership to look for a new car, I bring my hardware bag and 24" bass drum (largest one I have). If both don't comfortably fit, I pass on the car, no matter how good the deal is or how nice of a car it might be.

I never buy an SUV because I don't like the higher load-in height. Plus, where I live (LA suburbs), an SUV just doesn't make sense.

My small Beato Pro 3 bag has held up for about 15 years so far, so I guess that's my favorite.

SKB, about 48x12x12.
Everything fits inside EXCEPT my moto throne top, which I stash inside the bass drum bag.
It holds all stands, pedal, stick bag, carpet. And it's not too heavy, although I use lightweight stands.
Stretch
R

Lately I've been using a lightweight DW hardware bag for the bop kit. It holds what I need and I can carry it up and down stairs without being hospitalized.

If the music calls for more gear, I use a larger bag with wheels.

What is that?
C 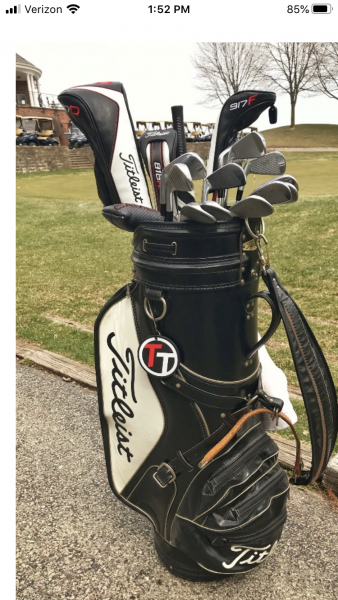 Years ago, freshly divorced and epically broke, an aquaintance who was a golf pro lent me his old bag which looked a little like this one. I took out the dividers and used it to haul stands in and out of gigs. I liked it a lot but had to eventually stop using it.

Please note: I don’t golf and have zero interest in golf. It’s a noble pastime and god bless golfers. I'm going to rag a little on drunk, obnoxious dudes I've dealt with at gigs who happen to golf, but I have a lot of dear friends who are golfers and I'm only referring to a few guys I came across.

I used the golf bag for hardware for about a year. At the time I was consistently playing parties and such in Marin County, California. Lots of golfers. At every gig some guy or guys would latch onto me and follow me around at load in or load out wanting to talk golf. Apparently the bag I had was unique or important. I’d politely tell them I don’t golf and someone gave me the bag.


Here’s the thing about a lot of rich white guys in Marin: They aren’t very good listeners. Alcohol or not. Ask their wives or kids.

A wife might come around: “Tower, let the guy set up his drums. That’s the third time he’s told you he doesn’t golf.”

The end for me was one massive garden party where a quartet of drunk men stood closely behind me loudly talking about golf while I played. One of my pet peeves is people standing behind me and talking while I play. Between songs I reminded the ring leader I don’t golf. “Get a load of this guy! Has a tour bag and says he 'doesn’t golf.'”

When I gave the golf pro back his bag I told him why. He laughed: "Those are like a lot of guys I teach. Most are really nice but some of them because they've made a lot of money think that skill set transfers to everything they do. They don't listen and are unteachable."
You must log in or register to reply here.

Tune-Bot Studio, $75 including shipping in the USA! "Like New"

T
Does size matter to you?