I’ve seen lots of threads from items on order, wish lists and peoples favorite items but what was your last impulse purchase? Since the favorite hi hat clutch post I’ve been looking at those options interestingly…what was your last and are you happy with it?

The last impulse purchase I recall was a Sapele stave bop kit: 14x18, 14x14, 8x12. I thought the 8x12 shell was too thick, so I had some stave drum makers with a CNC machine make me matching 6x8, 7x10, 8x12 toms and a 6.5x13 snare. I'm happy with them in that I really like the way they sound but have only played out with them twice. So... I probably should have passed those by.

I just bought the new Rogers hi-hat stand today on a whim because I got a good deal. Didn't NEED it, but I kinda wanted another lightweight tripod with good action. Took it to rehearsal tonight. Other than the legs being difficult to fold up/down (needs some silicone lubricant or something), I like it. The legs rotate and the action is adjustable and smooth. Time will tell. I may pick up the throne, too, and put my Roc-n-Soc top on it. 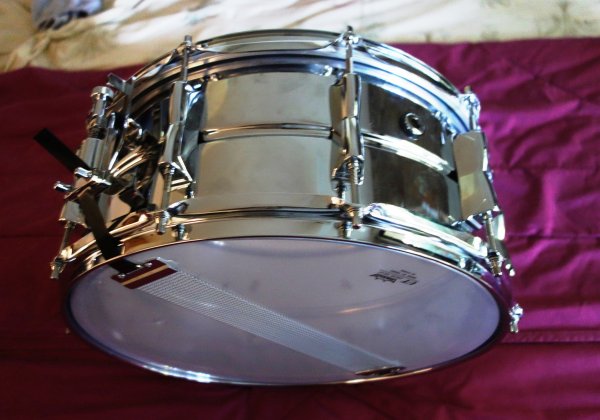 My last impulse drum purchase was this Zildjian 20" Take Five Reissue ride cymbal that I bought early this year. I didn't need another ride (I already had three) but fell in love. It now occupies the main ride position on my kit about 25% of the time. Definitely glad I bought it!

My last impulse purchase was a 20" Sabian HH Manhattan Ride which weighs 1660g. Somebody I've bought cymbals from before emailed me after it didn't sell on a local site and asked if I would be interested. I decided it would be a useful addition to my set of light 20" cymbals for sonic comparison. In no particular order it the 20" light set includes:

I've got a number of more medium 20" cymbals running from 1990g late 50s A Zildjian example, to an A Zildjian Medium Ride from the 80s at 2434g, and a gap before the heaviest which is an A Zildjian Mini Cup ride with a 70s stamp at 3180g! I've got Turkish and European and American a few Chinese made, plus the one Canadian.

The goal is to prepare a set of blind listening tests to explore how people perceive various cymbals, and what terms they use to describe them. Say smokey for example

What exactly does it mean to you when cymbals are described as “smoky”?

I've got completely hand made cymbals, cymbals with a mix of power hammer and hand hammering, and cymbals with various modern technologies trying to emulate some of the cymbals from the 1950s. I've also got B20 and B15 examples. This is also repeated in 18" and 22" diameters. This research project allows me to buy cymbals I don't necessarily need or plan to use, but I get them "for research purposes".

It also means I mustn't sell any cymbals.

In 2009 I was at Atomic Music outside of DC. I was getting ready to leave just as they put this on the floor, a "Coffin Case Company" drum hardware case. (I think that they only made these for a short time.) I thought that it was very cool, I bought it on the spot.

1.) It is ridiculously heavy.

2.) The odd shape is limiting as to what will fit inside.

3.) The odd shape also takes up a lot of space in your vehicle in relationship to how much it holds.

4.) Did I mention how stupidly heavy it is?


The good news is that I love Halloween.

A plastic skeleton "lives" in it. On Halloween I drag it out on my porch and aim a black light at it.

It is an excellent Halloween prop. 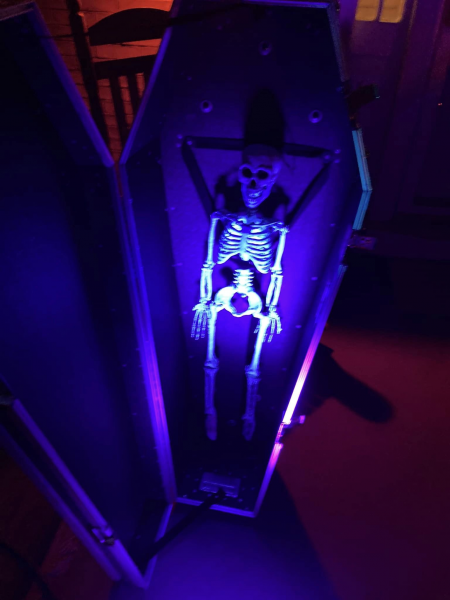 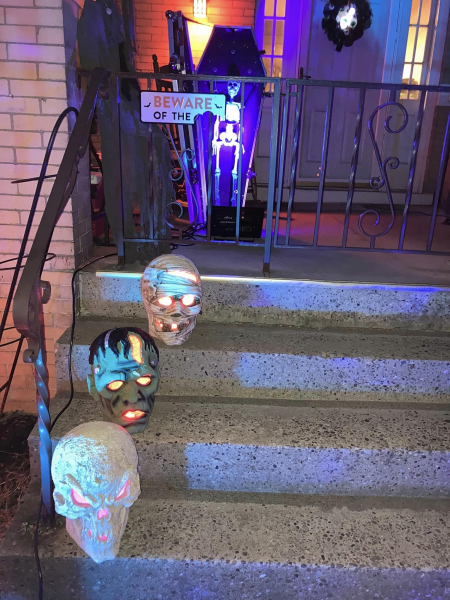 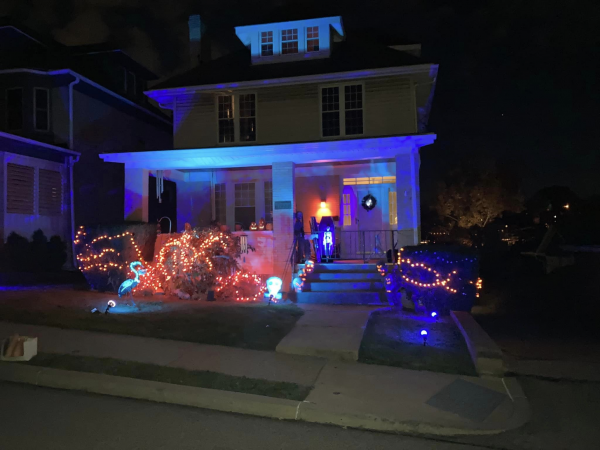 I rarely make impulse buys. This one worked out lousy as a piece of music related equipment, but I use it one day a year and love it.
Last edited: Nov 17, 2022
M

Too many I have to sell…

I snagged a Pearl Stavecraft last week for a steal and I’m really enjoying it. I haven’t experimented with many tunings yet (it’s cranked pretty high right now). I suspect it will have limited range, but man does it do loud-but-full very well.

stevil said:
I snagged a Pearl Stavecraft last week for a steal and I’m really enjoying it. I haven’t experimented with many tunings yet (it’s cranked pretty high right now). I suspect it will have limited range, but man does it do loud-but-full very well.
Click to expand...

Which wood did you get? What size?

That's an easy one for me... this stunning British Drum Company Legend Birch beauty. I bought it here off the forum boards and even told the seller I really did not need it, I just WANTED it and would probably move it on one day. I owned it for exactly 3 days when a buddy dropped by and said "HOLY COW... WHAT IS THAT?". He fell in love more than I had and left with it, I did not even try to make anything, just told him what I had payed and he said please sell it to me! LOL! But glad I did buy the drum as it was the first time I could really scrutinize a BDC instrument, it is an amazing build quality! 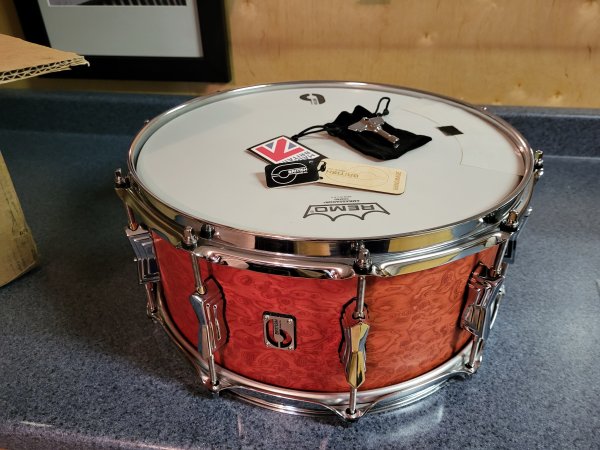 Picked these up a couple weeks in a pawn shop because I’d never really tried Paiste hats and for $100 I assumed I can break even no problem if I don’t like them. I haven’t really reached a verdict yet on them. I like the closed sound, the opening sound lacks some body but thats kind of normal for 13” 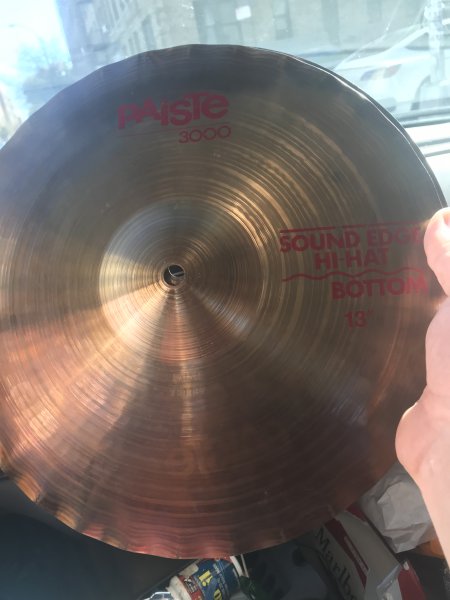 On a more serious note - I recently bought a PDP New Yorker kit (14/10/13/16, not the Daru Jones version) in Pink Sparkle that was on sale at Thomann´s. And it´s a winner!

I had a Pearl Midtown that I sold because i never used the toms, got a Tama Club Jam Mini bass drum (18x7) instead (great!) and suddenly got GAS for a 4 piece again. Heck, for 360,- I couldn´t say no. 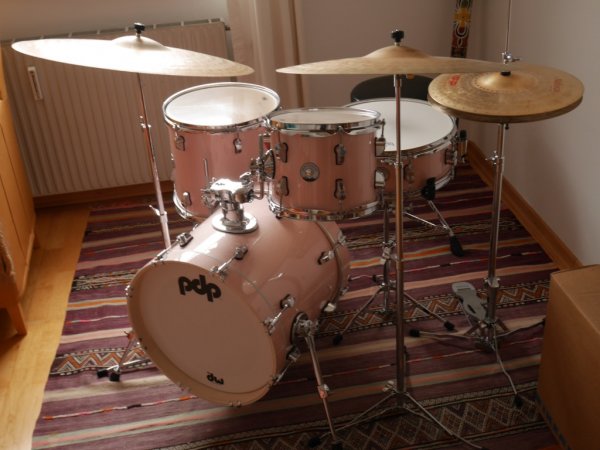 And it goes so well with the carpet!

A Sabian Thundersheet that I am debating on setting fire to it in a performance.

i bought this 60's ludwig silver sparkle bass $190 c/w 2 brand new heads
the drum was painted black on the inside .... for the last week i've been stripping the inside
i finished yesterday , today or tomorrow i'll put it back together

1971 Sonor ferro manganese seamless 14x5(ish) snare . It has a thro similar to the old Gretsch Micro and an adjustable butt . 8 lugs are almost identical to Ludwig Imperials . I 'm 99.9 % sure this is the same as Buttrey's on the Neil Young Harvest album .

I wandered into Dave's Drums one afternoon unaware of the psychic forces waiting to ambush me .

i bought a couple of the discounted demo Inde Timbatoms and the Timba bass drum they put up on their site yesterday. i already have one timbatom i bought a few months back, and had been very curious how a kit would work... so now i guess i will find out! i love single-headed drums for recording, and i figure these will work well. we'll see, i look forward to making some demos!

My last impulse buy was my Craviotto snare that I bought the day after Johnny passed away. I had wanted one for awhile and didn't know what the status of the company would be after his death, so I grabbed one while I could.

Treviso1 said:
Which wood did you get? What size?
Click to expand...

6.5" Makha. They only had the 6.5" in makha, but they had the 5" in both oak and makha. I frankly couldn't discern much of a difference between the two woods in the shallower size, but I wanted the deeper option and find the darker grain more attractive, so it was an easy choice.
You must log in or register to reply here.
Share:
Facebook Twitter Reddit Pinterest Tumblr WhatsApp Email Share Link