I have what I think is a 21" A medium ride. I bought it like 20 or more years ago, and that's what I remember anyway. I got it used at some store I can't even remember because it was already drilled for rivets which I never did place in the holes.

Based on the super hard to read stamp, can anyone guess when it was made? Cleaning the cymbal migh make it easier to read, but I'm afraid cleaning it will change its sound. This cymbal sounds killer using small bead tip sticks.

Looking at some stuff on the web, the Zildjian font looks like it may be a mid 50s, but I kind of doubt I would have run across something that old.

50s I think also. It's just like mine, I think it's gets described as 50s zildjian light ride w/t rivets.

It looks more like yours in the flesh. Great cymbal.

Interesting. Did they come from the factory drilled?

Yeah, im not sure. Mines got 6 yours is 8. I got it from hazelshould. He does get them in and his descriptions are very nice and detailed even with great humor to make it more interesting! These do sound great.

I wouldn't clean it, I did and all it did was increase the wash sound but NOT increasing the focus, as I was trying to do, though it already sounded great, I just thought ' oh I could bring out a bit more top end to the sound, it didn't. I once tried to "re-age it again! by putting vinegar and lemon on it. It still sounds great special for swing stuff ( which was the era they were made)

I see a 21 like mine on Reverb with 8 holes. They want $195 for that one and it's got a nasty keyhole. Mine's in perfect shape and I'm sure I paid under $100 for it...I was poor, so it had to be cheap if I bought it. I'll weight and see how many grams it is, maybe that will help determine what it is too.

Just looking at the available photos I'd guess it's from the 1970's. Many of Zildjian's production at that time have very faint and/or partial stamps. The lathing also looks of that era, but I am by no means an expert on cymbals.

According to my scale it weighs 2825g

Tornado said:
According to my scale it weighs 2825g
Click to expand...

That seems kind of heavy for a medium. Does it have an ink stamp saying it's a medium?
I'd guess it's a 21 Rock Ride which was a particular model introduced in the early 70's. They didn't come with rivets usually but Zildjian would drill any cymbal for rivets if requested, and/or the store or a previous owner could have drilled it as well.

Any ink on this cymbal was lost long ago.

I cleaned the area of the stamp to possibly get a better look.

It doesn't seem to have "MADE IN THE USA" as part of the stamp, that I can see at least, and there seem to be some made in the 70s that are missing that, according to http://www.hidehitters.com/cymbals/Zildjianstamps/timeline.html

Tornado said:
It doesn't seem to have "MADE IN THE USA" as part of the stamp, that I can see at least, and there seem to be some made in the 70s that are missing that, according to http://www.hidehitters.com/cymbals/Zildjianstamps/timeline.html
Click to expand...

Years out of date and incomplete site alert!

Use mine and you will find far more info.

That's a later 60s cymbal. Here are my reasons: 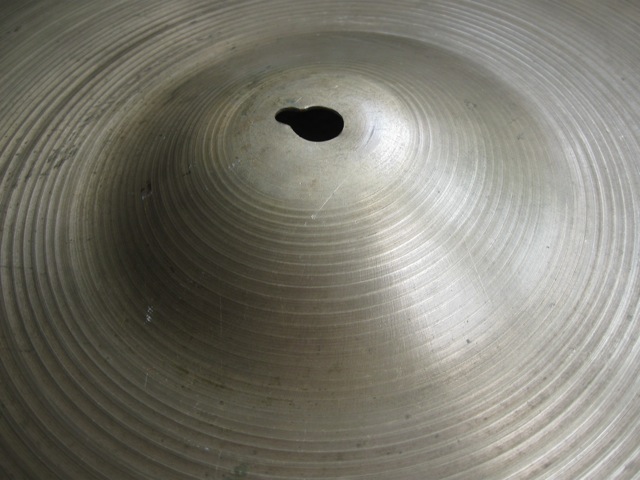 trademark is the 60s tall stamp which is easy to pick from the details: http://black.net.nz/avedis/avedis-gallery.html#60s-tall 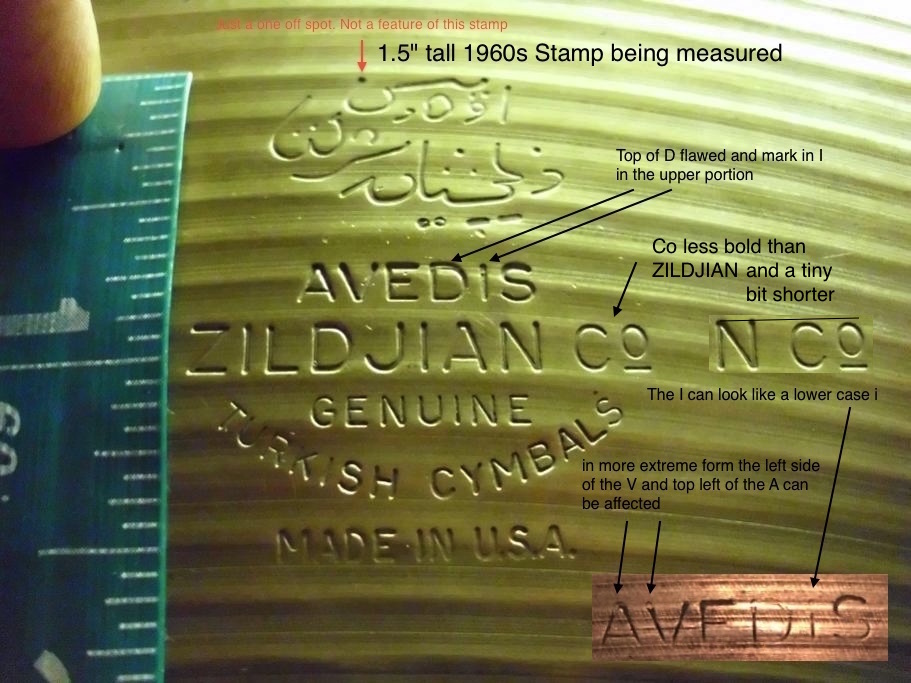 I've got a Made in Canada version which is 2660g. I got it just to document the Canadian versions of the trademark (with and without country of origin) which are early 1970s: http://black.net.nz/avedis/avedis-gallery.html#canada It's possible that yours never had the Made in USA line, but hard to say for sure since the trademark is so poorly pressed in. But if you follow the Canada link above you will see that yours lacks the details of the Canada stamp. Hidehitters has less than half the story about the Canadian trademarks, but we don't need the rest to identify yours.

larger bell: I haven't pinned down just when that started but it's found on 60s and 70s 21" cymbals, although there were some 50s bounce models with larger bells.

weight: that's lighter than the Rock Ride (or Rock 21) but heavier than most 50s cymbals.

I've got 48 weights recorded in my database for 21" A Zildjian cymbals from the Trans Stamp era to present, but I haven't done a proper analysis. Where they have model ink I can get specific models, but yes most older ones have the model ink missing. The Trans Stamps (and the recently launched A Avedis series) are light: 2072g - 2338g. Then there are plenty of 50s and 60s ones in the range 2350g - 2540g (including modern Sweet Rides). 60s and 70s come in at 2600g - 2850g, and then there are those Rock Rides 2900g - 3350g. These are just preliminary results subject to refinement when I get to it. But it looks like for the 60s and 70s you've probably got a Medium.

I'm not an expert...I agree that Zenstat is the person to get input from in this case. I do own several cymbals which I purchased new in 1965 that Zenstat helped me to identify as being 1950's vintage. My 22 inch weighs 2540 grams compared to your heavier 21 inch. I think the Turkish portion of the stamp would help in narrowing the year, but in the last picture that part of the stamp was totally cut off even though in the initial picture the Turkish portion of the stamp appears to be there but is not legible. Also, my cymbals never had any ink stamps on them of any kind, so I would not let that be an issue.

Not meaning to create any arguments, but having grown up in the 50's I'm not sure about the big band element in influencing cymbal sound...I recall the big bands as being pretty much swept aside by the pop, early rock and other acoustic groups that came on the scene in the mid 50's on...i.e Louie Prima, Elvis, Peter, Paul and Mary, etc. Whether Zildjian was making cymbals specifically formulated for big bands or smaller groups at that time, who knows? I can understand such an approach during the 30's and 40's....in the 50's garage bands began to appear everywhere....surf music and soul were becoming driving forces. By the time I was a teenager and the Beatles arrived in the early 60's I had been in no less than three different neighborhood bands...and my music instructors were pushing small jazz combos, not big bands.

Hope you get some better assistance with identifying your cymbal, good luck

Drumstickdude said:
50s I think also. It's just like mine, I think it's gets described as 50s zildjian light ride w/t rivets.

Yes yours has the SSA variant of the late 50s small stamp. And such lathing and hammering detail as is visible in your photo fits with that late 50s era.

After looking at it forever and in different lighting, I can barely make out the "Made in USA" line, but it's there. It does appear to be the 1.5" tall stamp. The bottom hammering also matches the 60's pattern on your site.

Bell comparison between these two cymbals in pictures. This sort of comparison isn't always easy because of different focal length lenses and camera position, but the two cymbals posted in this thread are close enough. I've shrunk the late 60s cymbal image so the cymbal diameter matches the late 50s cymbal image. Hopefully this makes the contrast clearer. I've been training up my eye to spot these bell contrasts, but even I get tricked sometimes so I find that I resort to this sort of comparison to convince myself. 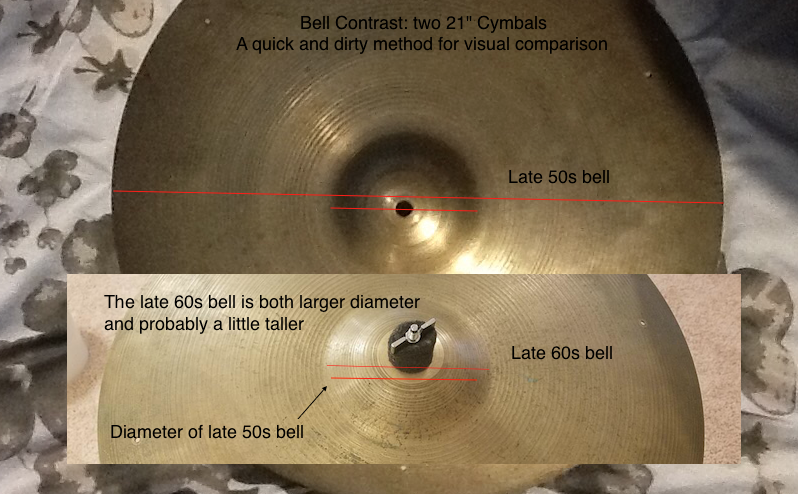 P.S. the reason I suggest the late 60s bell is also taller doesn't come just from the two photos I've compared here. It also comes from having measured a bunch of bells including the one on my Canadian A 21". And I'm talking about just a couple of mm taller. There may be other shape differences which one can spot from photos but I haven't got to that yet. I've got a few other research projects to finish first.

EDIT: There has since been a correction to say the late 50s cymbal is a 20" not a 21". The effect of this would be to magnify the bell difference in the above comparison. That leads me to conclude that the late 60s 21" is likely to be a 6" bell but I haven't rechecked that. I'll just put it out there as a prediction based on other evidence.
You must log in or register to reply here.

Which Istanbul Agop Hi Hats Are Closest to 1960s Zildjian?
2

J
Paiste cymbals - would you recommend?
2