Landofahhs, yes sorry about that, you are right about that era. I was going to mention that rock n roll and such was already around then. Also, although they had to sound right for the music, cymbals were cymbals in the Jazz era. Sorry I'm finding it difficult to think and word my thoughts here!

Sorry, I'm not trying to cram/ hijack this thread but if it's still worth mentioning, -when I described my 50s cymbal as being 21" I meant to say 20".
Z

Drumstickdude said:
Sorry, I'm not trying to cram/ hijack this thread but if it's still worth mentioning, -when I described my 50s cymbal as being 21" I meant to say 20".
Click to expand...

Oh well, that means I have to amend my work to compare the bells because that was based on the cymbal diameters being the same. I could redo the image scaling to have one be 20" and one 21" but I don't think I need to.

20" cymbals from the 50s tend to have 5" diameter bells, but there seem to be a few with slightly larger ones (more like 5.25"). I haven't got to the bottom of whether that represents two different bell dies or not. It's not too hard to pick up a 0.5" difference reliably, but 0.25" is tricky because when the transition between the bell and the bow is very smooth defining where the bell actually begins is currently more art than science. The same 5" bell die is used on the 19" and 18" cymbals, for the most part. There is also a 5.5" bell die and a 6" bell die. The 6" bell is what I've got on my 70s Canadian A. The 5.5" bell die is used on 18" and 20" crashes and crash rides, but perhaps only from the mid 60s on. Not sure yet. So...the only question I have is whether the late 60s one this thread is about has a 6" bell or something smaller. That's my current estimate since the correction to that image scaling I did would make the 60s 21" bell relatively larger again.

The modern 21" Sweet Ride has a 5.5" bell. Older 22" rides (as in 50s early 60s) have a 5.5" bell or 6" bell. It's hard to get details on the models for the 5.5" and 6" bell with 22" cymbals because of the model ink is usually gone. I might have to check 50-60 1950s cymbals to get one with model ink still legible. But I'm slowing accumulating data on all diameters including prices, weights, bells, etc. And looking all all these bell details reminds me I really need to improve my bell page info. I've got way more info now than when that page was written and it could

Thank you all for playing with a senior cymbal nerd.
Last edited by a moderator: Jan 18, 2020

I'm going to take some more pictures with a tape measure. Will post up in a few.

Another look at the stamp

A few bits of information of what I've seen from the pictures above...

Thanks Cliff. You and I see the same things. I've been calling that large center with no lathing on the bell the "bald spot". I'm familiar with them given the top of my own head.

The bell measurement photos seem like a good example of the difficulty in getting a reliable accurate measure. The bell looks well over 5" but I can't say it is 6" vs 5.5" vs something in between. What say others looking at the diameter pics?

And for amusement the groovy Rock ink which comes on crashes: 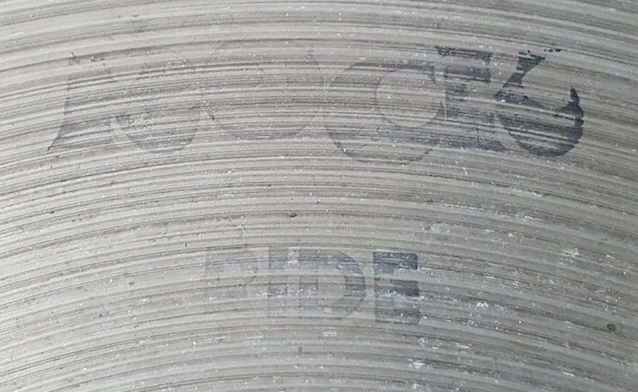 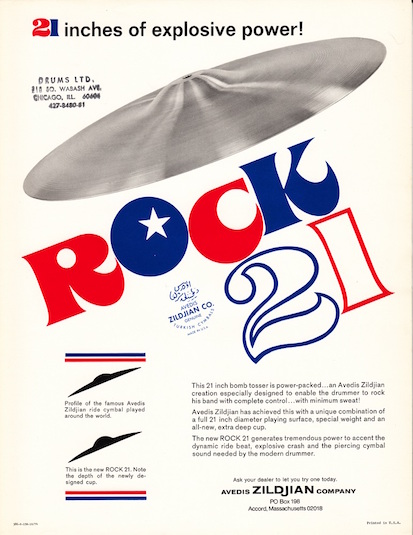 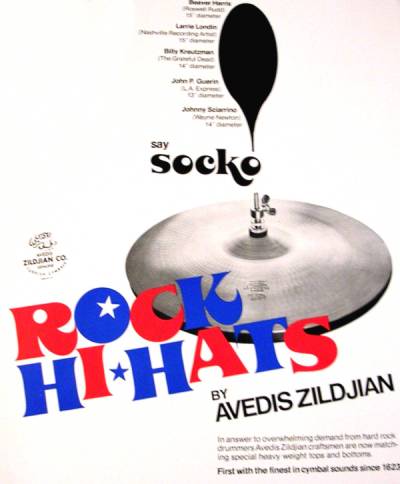 The very patriotic color scheme is associated with 1976 (USA Bicentennial) but the Rock series was around before then as it came out in 1973.

The bell measurement I've gotten on top is 5 5/8 in diameter. On the bottom bell measurement it shows 5 3/16, but a small part of the full bottom picture is missing. Helps when we have a full picture seen straight down, both top and bottom. Every cymbal bell is a little different as they gauged the thickness of the bronze during lathing. When getting into millimeters, or even 8ths sometimes, we'll never really know from one to another. These days I just look on top and find the lathing connection from bell to bow. Those are sometimes seen more precisely, rather than guessing where it starts on the bell bottoms (those groovy pants! I wore those in the 70's, even had a pair that were pink!... please kill me).
You must log in or register to reply here.

Yesterday at 4:04 AM
equipmentdork

Yesterday at 6:22 AM
Sinclair