Just now getting into cymbals and trying to narrow down what I will be searching for. I know sound varies a bunch from cymbal to cymbal and that you really have to hear in person to know what you are working with.


Sort of an impulse buy on my end. But, picked up this crash this morning and it is on the way to me. 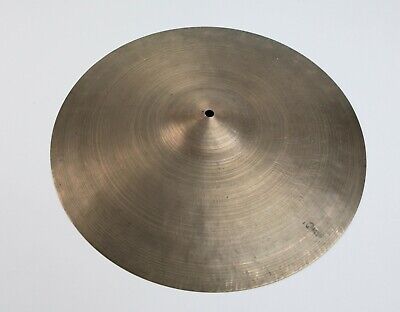 Edges have a few nicks.
www.ebay.com

Nothing like them Best 16" ever.
That one in particular appeared not to have a nick mark/ anywhere/ on it.
I have 3 16s. New Stamp, IV and Intermediate.
Those are besides production, sound categories. (sound correspond firmly with insignia)

16" old Ks (all era) are an 1" or so from being incredible Rides; it's a very close/thing..
You'd have to pay more than that for anything new close to it today.. and there's few close
& fewer (0) equal

@JDA You are an absolute wealth of knowledge and I appreciate the note - very helpful, thank you!

(when you look close) old Ks seem like they were lathed 5 times; multiple times.
and, One latheing (pass) didn't erase the prior and they all "exist" at once...

That was a very clean looking K istanbul. And without the usual light cracks or other issues. Signature on the back is a nice plus. Good find.

Completely got a new cymbal rig over the past two weeks. It was time and some of the prices weren't perfect. But picked everything up used to save a bit and did my research on what I wanted:


I know it's super hit and miss. But the owner of the 16 inch had an 18 and I really dug the sound of the 16 inch - so I bought the 18 intermediate stamp crash he had as well. Hopefully everything meshes well together when I get them set up!

I am a novice when it comes to cymbals and have just played what I've acquired over the years. So it's exciting to have some new cymbals.

The 18 Is an New Stamp(very excellent!) Nice contrast with the Intermediate 16" so I see it as, "all -positive" : D
And Yes you couldn't have gotten the 18" any cheaper figure 400 +/- plus (shipping and taxes) you fought and hung in there and won it. There's no other way to do it)
That's the greatest second hand side ride you'll ever own and of anyone who's ever made cymbals.
Keep the old Ks forever. PPs. you can carry an entire electric band- riding that 18" on your left- classic rock everything- I've done it with 18" New Stamp- nothing like them)

I like the way you add in some New Ks with the Old Ks..
That's a classic wise old Man move.. ; ) where'd you get them Brains DD

Right there you're killin' it with what you have listed.
You're done I'll have to think of anything you could add to it. you are set with a set!
Last edited: Aug 3, 2020

Watched that 18" K Istanbul go off today. Hung around $250-ish until things got serious........giving some of us "hope" maybe it would slip by at $350 or something. No chance of that though. Nice job in completing your set.

I had a chance at an 18" Zildjian KI last year sitting quietly in a pile of cymbals for sale for $80....as an "old Zildjian." Seller had no idea it was a K until I inquired about it and asked him to read the stamp to me (had to do that since I was 300 miles away). He saw the "K" on the stamp.....and still didn't know it was anything but an ordinary newer USA K. Never heard from him again so he must have figured it all out. If I had lived closer I'd already have one.....
Last edited: Aug 3, 2020

@Tama CW Sounds like that would have been a score! I'm sure a lot of the older Zildjian K's have been swooped up at this point. How frequently would they come stock with sets from the big brands like Ludwig, Rogers, Gretsch and Slingerland?

@JDA You make me feel for stoked for the purchase! Wasn't the ideal time to drop coin on cymbals - but I'm playing a lot more and wanted to get dialed. I'll keep you guys looped with how the 18 inch sounds!

I ; ) already know how it sounds; (and) it will keep you interested for 20 years and more

JDA said:
I ; ) already know how it sounds; (and) it will keep you interested for 20 years and more
Click to expand...

Interesting. I'd read a lot of stuff around here that says even the early K's are quite variable, and you have to hear them before buying to avoid "clunkers." In the A's I'd say the 18's are the most variable of all the sizes. I never know what one will sound like until I hear it, regardless of weight and era.
Last edited: Aug 4, 2020

Tama CW said:
Interesting. I'd read a lot of stuff around here that says even the early K's are quite variable,
Click to expand...

Tama..within an era...they are near carbon copy identical besides diameter and gram weight- as if the same team made each----within an era.

If you want to know the truth, A's, were (way) more variable thru out the same period say 45-78
Old K workers were strict----always within an era----when that insignia changed----so did the 'design'----as if the 'team' that built them---was changed.
So you have six era of Ks. 3 if you include the first three or four as One (I,II,III,IV)
second era (Intermediates) third era (New Stamp)

Take an example---16" Type IV from anywhere in the world today---put them next to each other they are identical. (Sound Characteristic Visual everything..bell cup lathe...)
Take a 20" Intermediate---same thing---- all the same.. barring the weight. (and even that can be argued; many were (shaved to) the "same" weight...)

Old Ks (I'd argue I could argue) were more consistent than A's. Less variable than A's of the (same) time (periods)..
Actually with A's the lathe man it seemed had "more freedom" "freer rein" more leeway.. Old Ks were strict (or it was the "same (finishing) guy" thru out, (within) an era....) (smaller operation less workers (smaller team) (than A. ..(Less variable...

If I've (you've)..seen one heavy gram new stamp 22".... you've "seen them all" , type of thing.
.. pick an era (not even diameter) and you'll see the same hands built and finished them. Until the next insignia change. That's the way it works with old Ks.

A small tight-knit group (mostly with hands) built each one. So the consistency -thru out each and every- era was high
Last edited: Aug 4, 2020
You must log in or register to reply here.